3pm Saturday: Day 1 of my new antidepressant, following the lack of effectiveness of Lexapro, which only made me feel fatigued.

Eight and a half hours later, feeling pretty OK. No adverse effects yet, but it's a slow-release med, so who knows if I might feel something later (I hope not). No vertigo or dizziness or 'high' sensation; no accelerated heartbeat. Not feeling sad either, so ... hopefully it's kicked in? I don't know.

I guess we'll find out. Wish me luck. 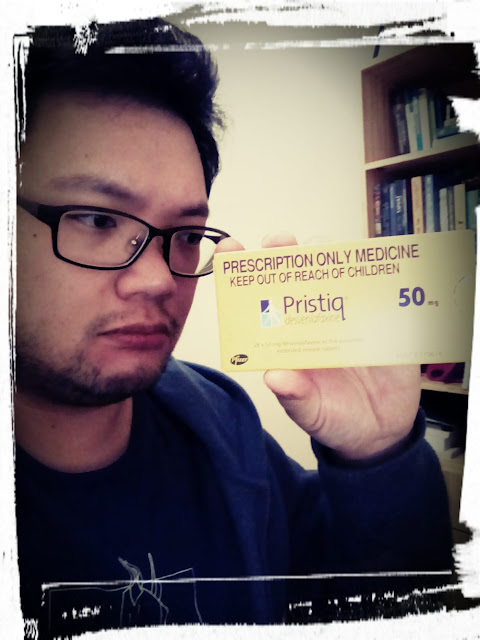 Back But Not Necessarily Better Than Ever

Hello all! Yikes, has time flown or WHAT! I can't believe we're at the end of June already, when my last post was in April! But yeah, quite a bit of stuff has happened since, most prominently the three-week run of The Edge, as mentioned below! I'll come back and retrospectively post more about the show, including photos and all that, but let's just say it was a tremendously moving experience, even though it was a bit frustrating due to the difficulty in securing a solid audience turnout. I guess that was to be expected, with that sort of topic. But Carol, Scotty, Bernie and Beatty (hiiiiii guy and girls!) attended on one of the weekends and they loved it, YAAAY!!!! Bernie even said it's her favourite out of all the shows of mine she's seen, hahaha. Awesome possum.

But yeah, the audience turnout could have been better, and even more frustrating was how many people out of the hundreds of supposed friends in Perth I'm connected to on Facebook showed up for the shows (grand total? Maybe one out of the current enrolled batch. One fellow PhD candidate. And a handful of other former students). Yes, yes, I should be grateful for their attendance, and believe me, I am; though I was surprised how hard it hit me that so few others made the effort to show. So much so that I wrote a long FB post about it (to be linked eventually); and then someone commented about how I ought to try being a better friend... and long story short, I've disabled my FB account (again! I did this this time last year!) and have been off it for about two weeks now, which is difficult, considering how isolated and alone I've already been feeling; without social media, it's been magnified manifold! Gah!

Compounding the sense of isolation and separation from the Uni community, I've also lately been feeling really bummed and directionless with regards to the PhD. You see, my supervisor Jenny retired at the start of the year, and my co-supervisors (who are really nice guys but I think are relative newbies to the supervision scene, hence they can't be promoted to primary supervisors) want me to go in a different direction research-wise; a notion supported by the person who is likely to be my new main supervisor. So suffice it to say, I've been freaking out and anxious about all this change... coupled with the fact that I really haven't done all that much fukkin' research to begin with... well, let's just say that right now, one of my seriously-being-considered options is to call it a day and withdraw my candidacy. Yeah.

So we're at that point, folks. I've literally just had a meeting with the two co-supervisor dudes, and they didn't initially sound optimistic about my progress (or lack of). But they're telling me it's really up to me how I wish to proceed. They did say, however, there's no shame in recognising when something isn't really for you. "It's brave to admit it; it's brave to 'fail', for lack of a better word," they say. Sigh.

All in all, boys and girls, it's been a pretty rough time. From the loneliness at home, exacerbated by the temporary(?) quittage of Facebook; to the confusion with PhD direction; to my ongoing missing of the doggies back home and lack of creative inspiration (still have a composing project to go that's fallen behind schedule due to all this)... and The Edge being a critical success but a commercial less-than (which is all one can hope for, right? I guess?)... it's been challenging. My depression has been rearing its fugly head again in recent weeks, so much so that as of today (Friday) I visited my long-neglected doctor at the uni and have been prescribed a new bout of antidepressants... a new type, in fact, which I haven't tried before. So I'm bracing myself for a new round of side-effects (gaaah) once I pop the first pill, which will be tomorrow. Wish me luck.

So that's been the latest in the madcap world of NickChoo, boys and girls. How have you all been?
Posted by Nick Choo at 6:17 pm No comments: