October, Where Hath Thou Gone??

Hey all! Time for my monthly update, haha! It's been an interesting time. I'm still on the anti-depressants but have reduced my dose (through my own decision) by half because I've been exhausted most days, needing mid-afternoon naps, etc., which wasn't all that common for me previously. So now I'm taking half the pill at a time and it's helped reduce the daytime fatigue, though my night-time sleeps are still not too peaceful (that said, I've been having hayfever symptoms so it's probably more to do with my blocked nose than anything else).

Either way, I'm planning on taking some time off and go home for a little while (am heading back to KL on Nov 26), so I need to figure out how long I'm going to remain at home, what to do with the meds (do I stay on 5mg? Do I change to new meds, which bears the risk of my body adjusting to new effects? Also, I need to be able to have enough supply to get me through my away time in Malaysia. Oh how, now, brown cow?).

On the household front, the ice has thawed a little bit between Other Nick and me, with some pleasant conversation going on, but I still feel indifferent/resentful sometimes towards him (which, I know, I know, I should try to move away from, but everything's just so much work these days!); I'm still very much wanting for him to no longer be a part of my life, which means either I move out or he moves out or both. The problem right now is that I can't move out without finding someone to replace me, and since I'm going home at this month's end anyway, I think it's not something I should bother trying to deal with right now. He's having the same problem, which is that nobody's biting at the ads for a replacement housemate; so he's stuck here until the lease is up in March next year too. Oh well.

In the meantime, though, I've been planning on what to do once I leave (which I'm quite inclined to do; between the Other Nick situation and the lack of emotional support from the other guys - as much as I have fewer issues with the other two blokes, who I think are cool dudes)... the last week or so I've had dinners at a couple of mates' places to scope out potential rooms. My dear friend Alli has invited me to live with her and her partner, and they have a lovely Great Dane, but they also have a new baby and so the house gets quiet real early, which I don't think would work for me too well. I'm really grateful to Alli and Ben for even considering me, though! Thanks hun! xx

I also had dinner with Joey and Aleesha, a couple, and I really like their house! It's further away from uni (and therefore even further from the city), though, but just this past weekend I stayed there on my own while they were away, and I actually thought it was quite a pleasant place. I definitely felt comfortable and at home there (despite the presence of a rather noisy neighbour, but I think there are workarounds); and right now my heart is telling me that I should really move into that place with them. Here's a pic of me at their place over the weekend. Oh, and the best part? They have a lovely doggo named Horace, and a kitty named Nylah! PETS! WHOO-HOOO!!!!

The tricky part with Joey and Al's is that their lease is up in December this year, which means I need to commit to them so that they renew their lease for next year, otherwise they were planning on moving to another (smaller) place. So that's something I really need to decide on in the next couple of weeks, because I don't want to say "yes" to them and then leave them in the lurch. I'm also still contemplating what to do with this PhD because my focus has been entirely NOT on it for the past few months (in fact, I'd say this entire YEAR!), so I don't know if I'm going to go through with it, though I'd be stupid to give up a scholarship, I know that very well and truly. So... yeah, a lot of contemplation going on. I'm feeling a bit of stress with what to do in terms of household, personal and mental health, PhD, etc. It's all very (at the risk of repeating myself) exhausting. Exhausting.

What else? Oh yeah, on Oct 16, my mum, who has zero access to my more personal FB posts, demonstrated a very keen sense of intuition:

It allowed me to open up a little bit about the depression and stress to the family, and I think it will be easier for me to discuss with them the issues going forward, including whether or not I want to remain in Perth, or whether I want to return and try my hand at something entirely new and non-"arty". More on this as and when it develops, I suppose...

Other moments in the past month:

I bought new vacuum cleaner for the house! Isn't it a sexy minx??? 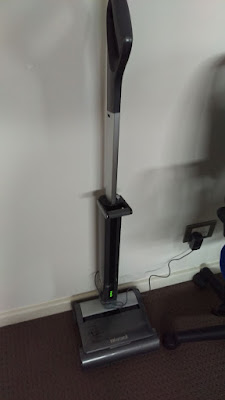 On Oct 20, I surprised Plant Lover Housemate (who's still my favourite housemate) with a little platter for his birthday. Lesson of the day: timing is everything when it comes to gamers. There I was, platter in hand, candle alight.

But later that evening he told me, all sweet and bashful, that he really appreciated the gesture and that it was the highlight of his day. #BestHousemateEvah (me!) 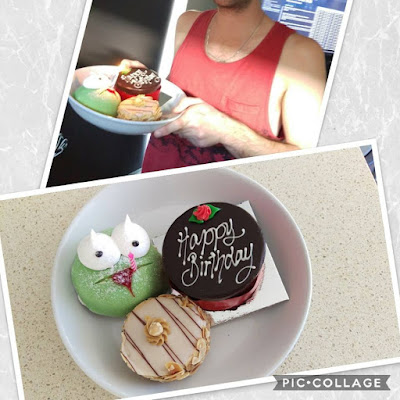 This month also saw me getting a little bit into the theatrical groove by attending rehearsal for our upcoming tour of Home At Last, the children's play we performed in April this year, which will be going to Malaysia at the end of this year (and for which I'll be returning to KL on Nov 26 along with Jenny and Sarah). Here are a couple of pics:

Finally, I shall leave you with a couple of selfies taken on my walks recently. Thanks for checking in; I think I shall make it a point to update this blog on a monthly basis at the very least, so that it's kept alive with a minimum of 12 posts annually, haha! It's also a less stressful but nevertheless cathartic and useful (for posterity) activity for me to recap the month's goings-on. Obviously if more stuff happens, then I'll update more regularly, but for the time being, I think a monthly post is manageable. So tune in at the end of November to find out what's being going on! Till then!