So yeah! The main creative thing I'd gotten up to over the last few weeks has been Home At Last: A Toy's Journey, which was a children's theatre play written by Jenny and produced at Studio 411 (formerly the Drama Workshop) at Murdoch Uni. We did four shows (one of which my new housemate Other Nick attended and said he enjoyed — more on him in the previous post below!). It was a lot of fun, with a fairly intensive rehearsal period and just a few select (and experienced) cast members, including myself on the keyboard/piano.

The shows ran on April 22 and 23 (last week), and I'm glad to say it was a pretty successful run! Basically it was an original story with characters inspired by the real-life toys of refugee children who had brought their toys into Australia but lost them along the way. These toys are now stored in the WA museum. Arif and Audrey Satar were part of our team, and they were the artist-researchers who have been doing research into the toys at the museum over the past few years. Here are some pics, as well as a vid of us in performance (a surprising number of photos of yours truly... stuffed toys were the major theme of the show!).

The Toys' Journey a.k.a. Yo Heave Ho from the show:

The Arrival Of Other Nick

Haha, guess I lied about wanting to put this blog on hiatus! Actually, a few exciting things have been happening in the past few weeks, so let's do some recaps, shall we?

We shall start off with the arrival, almost two weeks ago, of my New Housemate, who moved in on Wednesday April 19. The funny thing is that his name is also Nick, so we've been referring to him as Other Nick, even though there has been some dispute among the housemates, specifically Social Housemate, who wishes to call him simply 'Nick' and refer to me as 'Chooey', which I don't like. Subsequently we have reached a begrudging compromise where I'm only referred to as Chooey in Other Nick's presence, i.e. to distinguish us from each other... but I don't like it! Grr!

Anyway, on Saturday April 8, the housemates went to Clancy's for a farewell dinner for Antisocial Housemate, a.k.a. Blake, who surprisingly I kinda miss... I miss his antisocial-ness and his not talking to me, arf arf. But yeah, we all had a scrumptious dinner complete with, like, 4kg of chicken wings (yikes), which we polished off, somehow. A funny thing: Other Nick had messaged to say he was waiting for us and had grabbed a table, but when we got there, there was no Other Nick to be seen. Eventually we wondered: "Ummm.... we told him Clancy's, but did we specify which Clancy's?" No, we hadn't! Turned out he had gone to Clancy's Freo, instead of Clancy's Applecross, where we were! Arf! So we had to message poor Other Nick and get him to come over, which was pretty awkward and hilarious. 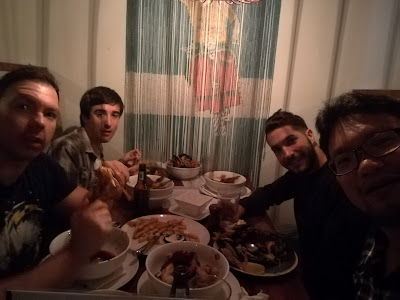 Well, since Other Nick moved in, we've been getting along swimmingly. He's a student as well as a musician, so he connects with me really well, and he's also a gamer (though not as fanatically!), so he's doing well with the other boys, I think! He and I have been hanging out quite a bit, including sitting through all 3.5 hours of Watchmen on Friday night, and having music-making and jamming sessions in his bedroom, much to poor Bren's chagrin directly across from Other Nick's door! This Wednesday Other Nick and I will be catching Matilda at Burswood (I oughta book the tickets though, note to self!), and he's generally been a good influence on me, encouraging me to get my lazy ass to the gym in the mornings when he goes to his own gym. In fact, sometimes I think we've grown a touch too comfy with each other, considering our friendship is less than 2 weeks old... 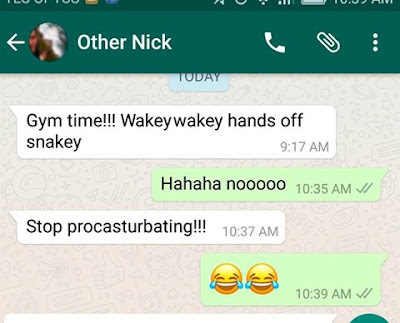 Here's a video of a very, very rough 8-bar track we created on the fly... he was supposed to be doing an assignment but he decided to show me his music setup instead, which meant he was the one procrasturbating, heheh!


...and here's me and him jamming, with him on the bass and me on the keys. So fun to finally have a musician in the house... and he's pretty open emotionally as well, which is really refreshing after the early months of #FIFOWifo last year and then the more reserved boiz prior to Other Nick's moving in! Anyway. Jamming. Here it is:

In his short time with us,Other Nick has managed to catch one of my children's theatre shows, Home At Last: A Toy's Journey (more on that in a bit), and has even met with the Gang (more on this in a bit too!). I'm going to end this blog post here and provide more updates in a new posting... which means, obviously, it will be published above this one, heh. Be back in a sec!
Posted by Nick Choo at 7:50 pm No comments:

Hey everyone, I'm thinking of possibly retiring the blog, or at least putting it on a long hiatus and only occasionally updating, since (as you might've noticed) I've been posting less and less frequently here, thanks to the rise of Facebook and other social media. So... I dunno, I've had this blog since 2004, which is a long time, and maybe I should keep it going a little while longer and not retire it altogether, but I'm just not feeling it anymore and I'm finding it a bit of a chore keeping things up to date, LOL. I might come back with a change of heart soon, but for now... let's consider this a push of the 'PAUSE' button. Till next time. ;)
Posted by Nick Choo at 10:53 pm No comments: