Hey all. So, it's been an interesting couple of weeks. I've been home alone because the folks and brother headed off to Penang for Chinese New Year, and they're still there now because brother didn't get any better and in fact was admitted to hospital, where he still remains till as of time of writing. He seems to be on the mend though, so that's good news. Apparently he was admitted because of an infection, and after tests it was discovered he had liver abscess, the definitive diagnosis being something called Klebsella liver abscess syndrome, which is usually linked with diabetes. So... yeah... I'm just waiting at home, doing work, taking care of the dogs. Here's hoping brother gets all well soon and they're all able to come home soon.

In the meantime, what have I been doing? Terry and I have been out at the movies... we saw Deadpool last week and the ridonkulous Pride and Prejudice and Zombies today, which lead us to be inspired with the following:

On the eve of CNY, I hung out with Little Jo and her family at MidValley as they had come up to KL for the festive period. And last week Terry and I hung out/caught up with Kevin, Irinna and their kids, also at MV, as they were down for a visit. Here's a nice pic of us having dinner at Steak Shack: 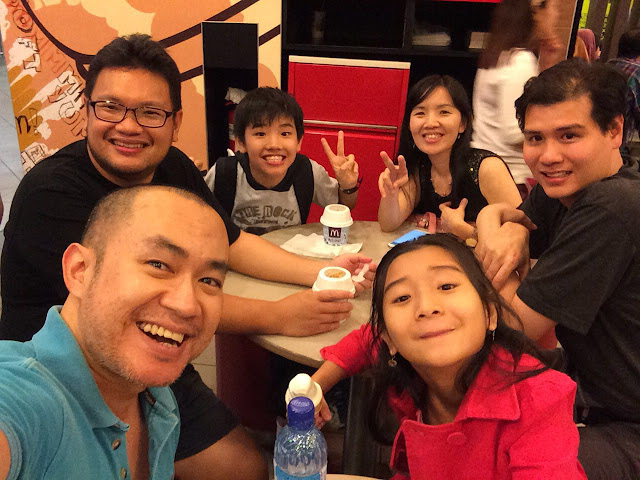 Anyway... more updates to come, hopefully. Will come back soon.... till then!
Posted by Nick Choo at 7:17 pm No comments:

Email ThisBlogThis!Share to TwitterShare to FacebookShare to Pinterest
Labels: Doggies

Yo peeps, what's up? Happy February! Bwaha, I can't believe we're in the second month of the year already. It's been kinda slow-moving; January went by with not too much happening, which is both kinda a relief as well as a bummer, depending on what kind of mood I was in. At this rate I think we'll be lucky if we get 12 blog posts here in 2016, arf arf!!

Well, today has been an up-down of a day. It all started last week when my brother started not feeling well. Then last night he claimed to have shivers at work, attributable to a fever. Today he had to leave work early again when the chills continued, and after going to the doc's to see what was going on, they discovered he had a blood sugar level of a whopping 30.4, which is, like, in total hyperglycaemia city! The latest medical incident with my bro was reminiscent, of course, of this incident, although in that case it was literally the opposite of what happened this time around. Oy vey.

So there's been quite a bit of stress at home, especially between bro and the old folks, and truth be told I'm ready to move on from here and start a new chapter in Aussieland, which (God willing) will happen in mid-May. Just a few more months to power through...

Speaking of diabetes and sugar levels, I'm gonna leave you with this video clip: a demo of a new song I've just composed, from my ongoing boyband musical work-in-progress tentatively titled The Ultimate Boy Blend. What I'm particularly chuffed about is that this song is really catchy, in spite of (or because of?) the fact that it has a fun but challenging two and a half octave range. (For those of you who are more music-technical, that's from an E3 to A5!)

This song is performed by the character of Jasmine, who is a diehard fan of the central boyband in our tale. She's a singer-songwriter herself, so she tries to impress and charm the boys by singing this. Vocals here are by my awesome and very talented friend Ammy Phoenix from Perth (who featured in the 10th-anniversary commemorative video recently!). Check it out! Till next time!