Hey all! Time's a-flying! Well, right now I'm in Singapore on my first day of a month-long sojourn here as composer-in-residence for Lasalle School of the Arts' second-year musical theatre programme! I've settled into their cosy accommodation a mere three-minute walk away from the school itself, and am right now in bed (or on it, rather), typing away and just enjoying the evening after a long day of travelling from KL (Uber to Sentral, followed by train to KLIA2, then plane to Singapore), and a meeting earlier this evening. Here, enjoy some pics of the apartment where I'll be spending the next 28 days: 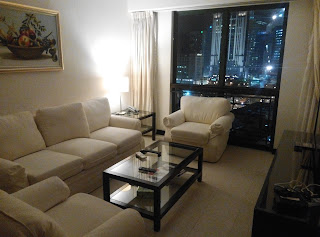 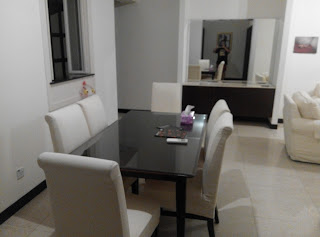 Of course, Singapore isn't the only place I've travelled to lately: I'd actually just returned from an eight-day visit to Perth, where I helped my dear friends Sarah and Ellin with their musical theatre project "2084"! We did a suicide run of four days of intensive rehearsals, 9am to 4pm daily, and then presented 30 minutes of material to a small select audience who gave us some very constructive feedback. All in all, the performances ranged from strong to scrappy, but given the amount of the time we had to pull it all together, I'd say it was a job well done! And it was fun working intensively with a mostly Aussie cast again. I'm looking forward to the full production, slated for August next year!

Sadly I didn't take too many photos of the rehearsals, but here are the few I have, as well as a video of Cat, one of the cast members, performing one of the songs from the show:


Between Perth and Singapore, I managed a brief stop for two days back home, where I hung out with Ashley (a sweetheart as always) and Kerbie (a bundle of zippy licky energy) as well as the family (tedious as always, he sighed with affectionate resignation).

A bit of drama cropped up prior to my trip to Perth. See, I'd booked a flight on Oct 20, and on the night of Oct 19, a few hours before I was due to get up to head to the airport, wouldn't you know it - I got an attack of the dreaded gout! Arrrgh! It was so bad that I couldn't walk and definitely couldn't travel. But I'd already booked the flight and had already checked in! What to do, what to do? So I tried to find ways to contact AirAsia, and wouldn't you know it, the airline has to have one of the worst customer service hotlines ever, in that it was nonexistent. Instead I had to log on to live chat, which frequently told me to try again because of "high volume of chats"; and when I managed to get on it, I had to wait minutes, nay over an hour, to get in touch with a customer service rep.

Long story short I had to get a doctor's letter and AirAsia said they'd refund me the flight. Sigh. So it was done - and I even got a shot in the bum to make the swelling go down. Doc said I definitely couldn't travel (I even had a temperature), so she wrote me a virtually illegible letter and that was that. I had to postpone my flight, change plans, even had to reschedule my stay at an apartment in Perth that was part of Airbnb, which I was trying out for the first time instead of booking a hotel like I always do.

Speaking of which, the studio apartment I stayed at was absolutely lovely. Owned by two guys, Russ and Nick (obviously a couple, though this was by coincidence, i.e. I didn't go about looking for a unit owned by a gay couple!), it was tastefully and artfully furnished, was very clean, equipped with all you'd need to hibernate and get away for it all for a few days, and even came complete with complimentary bubbly and chocolate. Here, check out this pic! 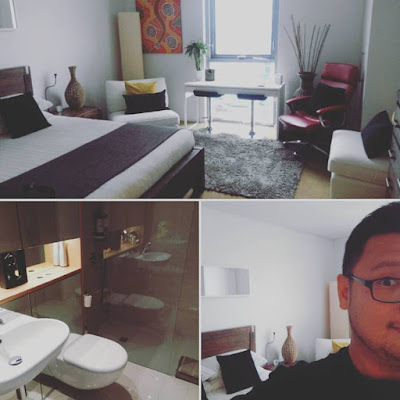 Because of the gout, I could only go into Perth two days later, thereby missing out on one of the nights at the Airbnb. Originally I was due to stay Tuesday, Wednesday and Thursday nights, but since I could only come in on Thursday itself, they let me stay Thursday and Friday night too, which was nice of them. And as a bonus, since there was one more night that I'd missed (and had already paid for), the guys let me come back at the end of my trip, on the Thursday one week later, to stay one more night before I headed to the airport on Friday and back home.

Unfortunately the drama with AirAsia didn't end there. Let me copy and paste some information that I'd posted on Facebook: AirAsia is a decent airline to fly on, but oy vey is it a mess when it comes to customer service!

So as some of you might recall, I was due to fly to Perth on Oct 20 but alas was struck down by the mysterious 24-hour gout attack. I had to scramble to find a solution, the only one of which was to speak to a customer rep via online chat, which required endless minutes/hours of waiting time.

So all was well - I got a doctor's cert and was promised that the flight to Perth would be refunded via credit which I could then use for a future flight.

I was hoping that this would all be processed relatively quickly so that I could use the credit to book another flight to Perth. However, it wasn't, so I went ahead and purchased another flight into Aussieland 2 days later.

At the airport when I checked in, I asked if my return flight was unaffected. The AirAsia lady said "yes", which meant I would have no problem coming back on Oct 30 as I had planned and already booked for.

HOWEVER, AirAsia then processed the refund on my flight -- which meant that the return flight to KL on Oct 30, which had been booked together with the original missed flight on Oct 20, had been cancelled so that the refund was for the whole booking.

FORTUNATELY I found this out the night BEFORE I was due to fly back home as I found I couldn't reprint my boarding pass for return flight (it no longer existed), and had to get back online via online chat and wait 84 minutes for my turn to chat with a customer rep.

An hour and 24 minutes later, I chatted with a rep who told me to hold on while he looked it up.
The chat eventually terminated automatically due to non-activity. FML.

I ended up waiting for over another hour (after being told multiple times that "there is a high volume of chats now, try again later") before reaching another rep who explained that my flight home no longer existed because of the refund. "So you have to book a new flight to KL," I was told. GAAAH. Fine.

So I looked up the flight, and thankfully there were many seats remaining. But before that, I checked how much they had refunded me: RM1,200 or thereabouts for the original flight.

I booked my flight to KL from Perth - and the total, which had to be in AUD, came up to approximately RM1,200 for a ONE-WAY FLIGHT BACK HOME TO KL. Holy crap.

See, if my flight home had remained intact, I would have had the equivalent of the one-way flight AirAsia had refunded to use on a FUTURE flight. Or so I'd thought. Sigh.

So that's been my experience with AirAsia. Time to look for a new airline, perhaps? To be fair, a lot of it is nobody's fault but circumstance, but between the money matters and the difficult accessibility to a customer helpline, it's been a headdesking experience with them lately.

Anyway so that's that. And I'm now in Singapore, as I've mentioned, getting ready to direct a show. This is the first time that I've been tasked with actually directing a musical project - usually I'm musical directing, while the vision is taken care of by a more experienced director - and truth be told, a part of me is feeling like I might be in over my head. But I think I've got a good team behind me, who are supportive and aware of the fact that this is all new to me; and I'm working with an experienced associate director who might as well be credited The Only Director, so... it's all going to be just fine, I'm telling myself. Or I'll just fake it till I make it.

Oh well, boys and girls, I think that's that for now. I'll be sure to update with more goings-on in Singapore. And oh yeah, have I mentioned there are plans afoot for Follow The Light in December?? Oy vey!! More on that later. Till then, here are a couple more photos from Perth. Enjoy!