So last Saturday my mum and I did what we'd set out to do, which is give little Kerbie - formerly my neighbour's foster dog - a furever home... OUR home!! It's mostly been a smooth transition, though as Kerbie has gotten used to us, she's also demonstrating more of her cheeky personality, which was all well and good until an incident a few nights ago involving a laptop, a mug of hot Milo and an overexcited hoppalot puppy. Let's just say there was a lot of cleaning up to do, and a resultant chastised young dog. :/

Territory issues with Ashley are ongoing but surprisingly it's not been as bad as we'd thought: Ashley mostly tolerates or ignores her, unless one of us is physically standing between them (e.g. at the front door, where a portable metal gate serves as a barrier to keep them separated. When we need to leave the house, it means we would stand between Ashley (indoors) and Kerbie (outdoors), and that's when Ashley gets fierce and growly. It obviously means Ashley views US, the humans, as her "territory", which would give Cesar Millan a field day, but never mind. We're working on it.)

Little Kerbie lives outdoors and indoors, though we've decided to let her be an outdoor-sleeping pup since she's spent months in the neighbour's front yard anyway. She's happy with it, it seems. And we occasionally put her in a portable/dismantle-able playpen, primarily for her safety when we move the car in and out, but also for when mum has tutition kids in the house who are a bit fearful of the little rambunctious puppydoggypoo. As you can see in the pics, we've tried to make her playpen (NEVER REFERRED TO AS "CAGE") as comfortable and inviting as possible for her, meaning she's been spoilt to bits with toys and such.

Sorry the pics are so blurry... she's a real mover, this pup! More pics to come!! 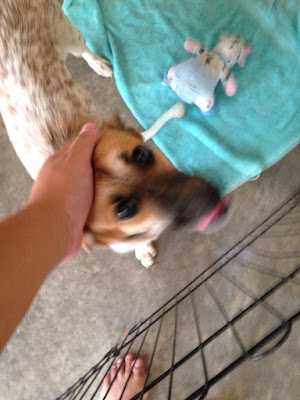 Email ThisBlogThis!Share to TwitterShare to FacebookShare to Pinterest
Labels: Doggies

Some recaps! I've been busy completing the music for the upcoming church musical Esya, and straight after that I've had to focus on composing for my friend Sarah's workshop for a new musical, 2084, which will be undergoing a workshop performance at the end of this month in Perth. Somewhere in the midst of that I actually submitted my application for a PhD scholarship at Murdoch Uni, which encountered a bit of drama because I'm required to take an English proficiency test. How rude! After some back and forth between Jenny, the Graduate Office and I, I've decided not to fight city hall and will shortly be sitting for said proficiency exam, because obviously none of this writing demonstrates anything about my capability of writing or conversing in my first language. Whatever.

Anyway, 2084, a new musical! Most of my time these days have been focused on coming up with some new melodies for the lyrics Sarah has written... it's quite a challenging piece, but so far so good. Stay tuned (heh, a pun) for more updates on this, k? In fact, here are a couple of sneak-peek listens - the latter the main opening number for 2084, something dark and twisty (at least, as dark and twisty as you can make it out without the melody included on the backing track!):


And this is from Esya, a last-minute addition to the score which became one of my favourite numbers in the whole show, doh! What do you do when you think a new song is a strong one? Do you then rework the score to incorporate more reprises and motif use? ORRRRR do you let it remain one of the lesser featured melodies, on purpose, so that its appearance in the show becomes an unexpected delight? LOL. (FYI, I'm opting for the latter.)


What else have I been up to? Oh yes, I just back yesterday from a one-day trip to Singapore where I met with some people from Lasalle College of the Arts pertaining to my upcoming month-long residency there in November, at the end of which I'll be putting on a showcase of my songs with the second-year musical theatre students! How exciting! The meeting was pretty good, though we're straining our brains to come up with a concept for the show with the theme "journeys", which is the title of the showcase itself. But I'm confident it will all come together once I start working with the students in a few weeks' time!! Eek/yay!!

On Sunday I had the privilege of being a judge, for the first time, for Short+Sweet Musical this year, which I didn't take part in. A good night of solid entertainment (some solider than others, arf arf!). Strangely enough the piece I liked the most didn't win anything (sigh) - it was this cleverly written ten-minuter called Stand Up... Or Die Trying, about a comedian in purgatory. Smart libretto and some complex music, which I think maybe went over most people's heads? I dunno. Anyway, they got into the Gala Night, which is something in itself. Congrats to the big winners!!

Well, that's about it for now... check back again soon for more updates!