So one of the projects I'm currently working on is a showcase of my original musical theatre songs!! Whoohoo! It's titled Dreaming Outside The Box: An Evening of Theatre Music by Nick Choo, at No Black Tie in downtown KL. So last night (well, Sunday) we had the first rehearsal with our singers Cheryl, Peter and Steph. Check out the video clips below for a glimpse into our process!

Methinks we take our rehearsals much too seriously.

More details and updates to come, including an official poster. In the meantime, check out the event page and this pretty little composite photo of us. Check back in again soon!

Hey guys and girls. Well, as of last week (Monday and Thursday respectively) I've officially begun a new round of therapy with a new therapist. So far so good: Monday was the preliminary, no-charge meet-and-greet-get-to-know-you, and Thursday was the first session proper. I'm feeling cautiously optimistic about this, so fingers crossed it's going to lead to some serious mental-emotional reparations over time.

In the meanwhile, I'm suddenly finding myself busy with several concurrent projects (when it rains, it pours pussies and poodles, folks!). I've composed a couple of tracks for an upcoming play at KLPAC (just transitional/background music), and have also been working on some music for a commercial project with a media company. So far they seem to like my stuff (though I better not speak too soon, oy!).

I'm also working on a showcase of my music which will be performed in KL middle of next month. And the biggest news of all is that I've been commissioned to write a full-length musical slated to be performed at the end of the year! It's being produced by a big church here in KL, although the subject matter isn't exactly churchy. More details to come as soon as I'm allowed to go public with this, heh! But just to whet your appetites, here's a sampling of music I've composed for it just this weekend, for a proposed dance sequence. Have a taste:

What else? Oh, just a whole lot of bits and bobs on Facebook. There was this whole brouhaha that came about when a (former) friend made a comment that I might have misinterpreted but which rubbed me the wrong way nonetheless; you can read all about it here. Then there have been some positive responses to my therapy updates, including this biggie. (And here.) Go read and entertain yourselves (and more importantly, keep up to speed on what's going on in my kooky world). Obviously these links will only work so long as I don't delete those posts. Not sure if you need to be my Facebook friend to access those pages though... but then again, if you're not my friend, you probably won't be reading this blog anyhow, arf arf.

Anyway, that's all for now. Will post more updates as soon as I'm allowed to let the cats out of the multiple musical bags. Till then!!
Posted by Nick Choo at 2:15 am No comments:

Hey all. Sorry for the lack of updates. Been on a bit of a major downswing for the past few weeks (!), no kidding. It all started at the beginning of June when my family went away to Penang, leaving me alone to look after Ashley. With very little on my plate, the brain starts to ruminate (hey! that rhymes!)... and it was all downhill from there.

Really, it's been one negative thing after another: my children's theatre contract from last year was terminated (with good reason, but that's beside the point); a couple of 'friends' demanded their money back for the travesty-trainwreck that was The Dollmaker's Daughter, which drove me into a tailspin; some potential plans for productions next year have yet to materialise (story of my life); I applied for a children's theatre residency in Japan but was not accepted; several grants I applied for were rejected; I had a very discouraging talk with a couple of theatre producers who basically said writing English musicals in Malaysia was an effing waste of time; and just last Thursday, the producers I'd been in talks with to do a musical during an arts festival this October (which had been in the planning for over a year) finally decided to pull out as Kakiseni, the useless organisers of the festival, have been unable to convince us that the project will go off without a hitch. That really was the final straw that led to a mini-meltdown (or not so mini, as it turned out) after meeting with the aforementioned producers who pulled out. Basically I came home, smashed things (including my new phone and new glasses), and ended up crying in front of my mum, which is, you know, an artist's dream come true. Sigh.

On the plus side, things have begun to pick up again, with a potential church project (uhhuh) at the end of the year needing my help, and further discussions underway with various peeps on upcoming projects. I tell you, though, this artist's life is difficult and all these ups and downs are doing my head in, so much so that I've scheduled a session with a psych clinic this week... best to get back into therapy, I reckon, so that I'm able to better cope with all these disappointments and challenges. I mean, I was posting up stuff like this on Facebook, for crying out loud. Oy vey.

Meanwhile, it was certainly a dramatic few days last week for my mum, too. It started the night before my meltdown when I made the folly of parking my car in the drive in front of the gate (i.e. the nose of the car facing the gate, its butt sticking out a little into the street). Later that evening there was a hubbub outside, and it turns out some moron had parked his car across the street perpendicular to my car, so the through-way between both our awkwardly parked vehicles was too narrow for other vehicles. Subsequently there was a whole line of cars all stuck, and I had to move my car, with difficulty. I swear, I was enraged - a little unnecessarily so, which probably warrants some discussion with the therapist. Anyway, I moved the car and was thereafter bombarded with insults from the driver of the lead car that had been stuck, basically accusing me of "not having cow sense" (sic) and yelling, "What kind of neighbour are you?" Cut to me losing my shit and screaming ridiculous things back at him while my mum looked on helplessly and while the surrounding neighbours, no doubt, got an earful too. All in all, not my finest moment.

Thursday was the night of my sobfest; then Friday another dramatic thing happened. You see, my brother had finished work at 9pm, so I decided to go to Tropicana City Mall and pick him up (and also to get ice cream). At TCM, I waited and waited and waited for him but I couldn't see him. Tried calling his mobile multiple times but it went to voice mail, and I even called home to tell my folks that I couldn't find him. About 40 minutes later, I called him again and he finally picked up and told me he was at 7-Eleven. So I drove up to the 7-11 and saw him sitting there. I honked, and he got up and staggered to the side of the thoroughfare in front of the mall. I saw him look around but he didn't seem to see my car. So I honked, and honked again, and each time he reacted, albeit failed to come over to the car.

Finally, I got out of the car and called his name, and even then he didn't seem to be turning in the right direction. Turns out he was completely disoriented, practically stoned, and couldn't even answer my questions: "Where were you? What's wrong? What did you do?" Basically it was like he had been sleepwalking, barely able to acknowledge me. So I had to guide him to the car and even help him get inside as he couldn't seem to figure out what to do. Frantic (but surprisingly calm), I called home, told the folks something was wrong, and we would meet at Dr Liow's in Uptown. So I drove Kev there, while he kept dozing off in the car, muttering incoherently when I tried to keep him awake. When we got to Uptown, Mum helped him get to the doctor's (poor mum, all frantic and panicky and emotional), while I parked and bought my bro a couple bottles of soft drink as we figured this was definitely diabetes-related.

Turns out he had a case of hypoglycaemia, which was probably caused by his injecting insulin prior to dinner, which would've been his first meal in over eight hours, and which had been far too small. Subsequently the insulin had caused his blood sugar level to plummet to a startling 1.9 (4.5 to 6 is the usual healthy blood-sugar level). So the doctor, a locum who responded very professionally and in-chargey (I always tend to think of locums as mere stand-ins who I can't trust as much as my regular doctor, but that's really a neither-here-nor-there prejudice), gave my brother some glucose solution (I think; I wasn't in the room all the time) and also told me to get him a fresh shirt as he had sweated through his clothes, cold sweats that threatened hypothermia. Which leads me to this little Starbucks-related incident (I've since let it go though).

All in all, about half an hour after being in the doc's care, bro was better again, and about an hour after being admitted, we were free to go home, all safe and sound. But whew, what a night!!! Thankfully everyone's okay (though I'm a little worse for wear, bwah-ahaha). And wouldn't you know it, first thing I did before heading back home was to swing by the Baskin-Robbins because, hey, I'd set out to get ice cream after all! And say what you want: after that whole diabetes-related scare, I think I deserved an ice cream at one o'clock in the morning lying in bed. Wouldn't you?? 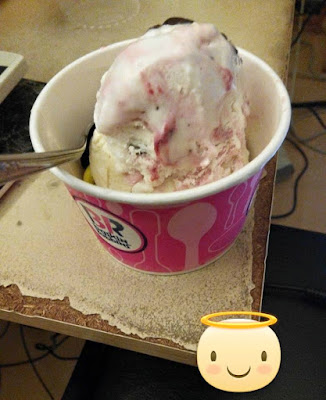 Well, that's all for now, folks. Thanks for checking in, and come back soon for more updates. Just like me, this blog isn't going anywhere just yet. Till next time. Bye.
Posted by Nick Choo at 9:13 pm No comments: