Did I forget my burfday? Oh yes, I did!!

Oh, that's for me to know and you to find out (which shouldn't be hard)!

To celebrate, here are some miscellaneous bits and bobs:


Edited to add these pics, thanks to Dom who forwarded 'em to me:

Hey all! I'm back. As I'm sure I've mentioned, expect that updates on this blog will be fewer these days, but you can keep relatively up to date by following me on Facebook or Twitter or Instagram! Then there's my FB music page as well, and my website! (Shameless plugs!) Nevertheless, here's a rundown of some of the stuff I've been up to the past couple of weeks. Let's see...

We had our cast luncheon in celebration of Zak Zebra somewhere early in the month, with a nice lunch at Ana Patin House, which served Malay food originating from Pahang. Very yummy, and it was lovely to meet up with the cast once again. There were little parting gifts too: stuffed in animals representing the creatures we'd portrayed in the show, haha!! Since my fellow musician Joanne and I were birds, here's what we were presented with:

On March 13 I had the privilege and thrill of attending a concert by my dear friend Janet Lee, who has launched her debut album that has one of our co-written songs on it! It was a truly wonderful and moving event where she commanded the stage with her band of musicians (including *squee* a string quartet!), telling stories about her journey both as a singing professional as well as of her personal life. Big, big congratulations, Janet!! Thank you for giving me the honour of being featured on your recording and during the concert itself! I won't be sharing the entire song here just yet, but if you're curious, here's a 15-second sneak-peek:


Last Thursday I attended the press conference for the upcoming show The Dollmaker's Daughter (which I'm almost entirely finished with; just a few more music scores to write out this week to go. At one point I was meant to be the musical director to help guide the performers, but I've since stepped down as I figured that, after spending two entire months hyper-focused on it, they'd be better off with someone who can listen to and interpret the music with fresh ears). The press conference was held at the Studio at PJ Live Arts (flashback to Follow The Light rehearsals!), where the cast performed snippets of the show to a rather cozy turnout of media folk. Here are some visually stuff:

On Saturday night, I joined a tableful of my theatre friends at the celebration of our mutual friends Michael and Anrie's wedding at the Concorde Hotel in downtown KL! A night of gossiping, drinking, laughing and singing, including two songs performed on the keyboard by yours truly. Fun fact: Anrie had contacted me a long time ago with a plan to surprise her (then) hubbie-to-be with an original song. So we plotted and schemed and conspired, and recently succeeded in writing one, with music by me and lyrics co-written. Somewhere along the way, Michael decided he wanted to surprise her too, so we plotted and schemed and conspired, albeit with an existing, non-original number. So there I was, caught between to plotters/schemers/conspirers, having to keep my knowledge of each other's plans hush-hush till the big day, arf!

It all went very well, I'm happy to report... that's why one should always perform music only when semi-tipsy on wedding wine and whiskey. Congratulations, you guys; lots of love and best wishes for a prosperous and happy future!!

The busyness over this last weekend was compounded by my being a facilitator for the Short+Sweet Musical workshops at KLPAC, held on Friday to yesterday. It was my third time conducting these workshops, where basically my role was to explain what musical theatre is and encourage the participants to come up with ideas and songs for a potential 10-minute piece. It went very well, I thought, albeit I was a touch nervous on the first day because my co-facilitator Dominic wasn't able to make it, leaving me alone to steer the ship. In previous years, I'd worked with another friend who took the reins, so this was a first! Alas, I'm not terribly good with instructional speaking in front of people, and there were about 25 participants, of which a large number were from UiTM in Terengganu, oy vey! I worried that there would be a language and perhaps a bit of a cultural barrier, but in the end these guys turned out to be awesome, very enthusiastic and hardworking even though maybe they didn't understand what I was saying all of the time. Still, in the end they managed to come up with story ideas, and even wrote and performed original songs that were pretty awesome, I thought!

If you're curious, here's a peek at one of the songs written by a group from the workshop. It's in Malay, and basically the lead character is an old-fashioned pencil who's super-cocky about being one of the best stationeries around, but in the end gets discarded and replaced by a mechanical pencil. Hilarious, and it was all written during the workshop sessions themselves. Not to mention, most of these participants had little to no experience of musical theatre, so all in all, I reckon it was a solid weekend's work! Check out the vid here (FB account required). If you're keen on learning more about what we did during the workshops, read on: 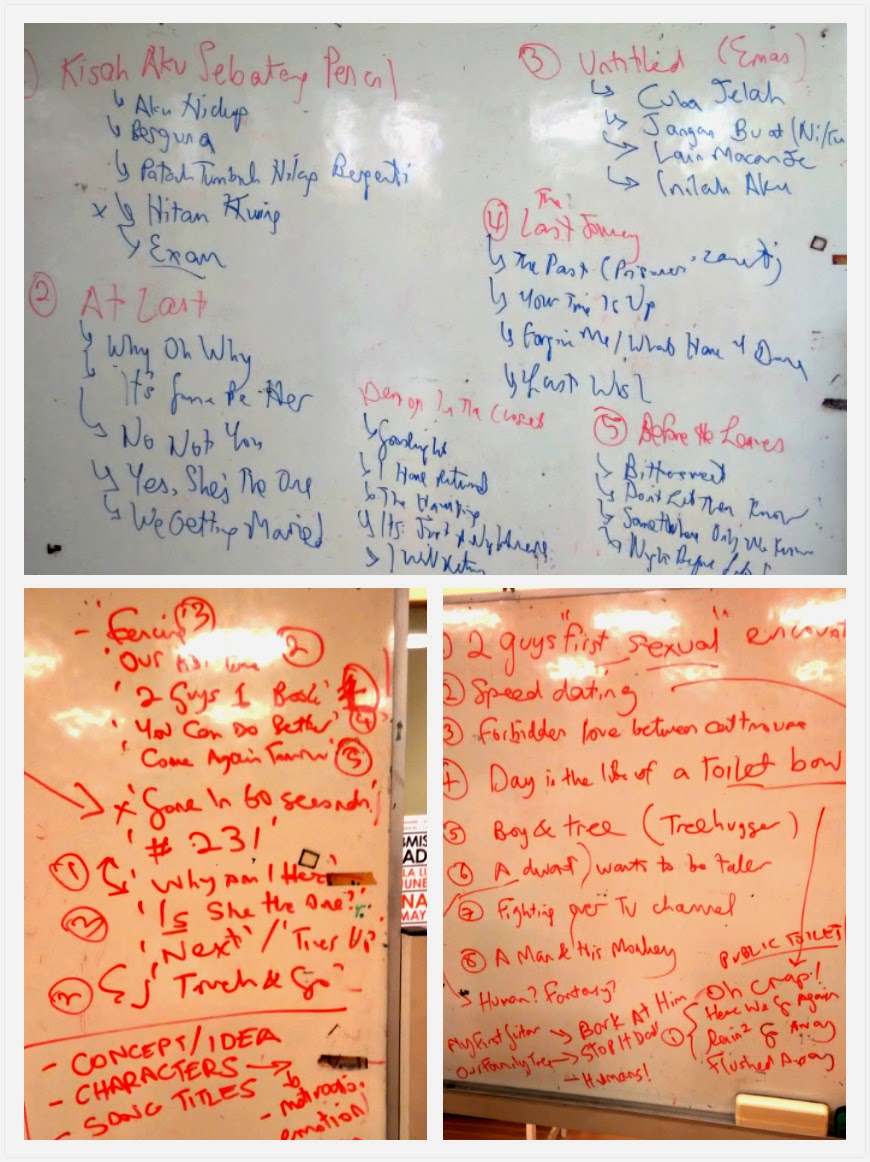 Okay, I know the above is hard to make out, what with my chicken scrawls and all, but it's some of the ideas we came up with during the session. Basically I asked the question: "If you could think of a simple idea that you'd want to present as a 10-minute musical – something that can be summed up in a single sentence – what would it be?" Some of the suggestions were:

Some of the suggested song titles for the toilet bowl idea included:


From there, I asked them to randomly think of potential song titles that would work with their ideas (the top section of the photo above shows some of the song titles). The best suggestions were for the idea on two guys' first sexual encounter, where suggested song titles were:
Knowing what these songs could be about, guided by their titles, one could possibly fashion a storyline that would fit into a ten-minute piece.

I then asked them to think about how to flesh out some of these ideas. The most fascinating development was from the simple idea of "a boy and his tree". Actually, it started as "a boy's relationship with nature", but that was too broad, so it got scaled down. And as we flung about ideas, the plot progression became like this:
OMG, right??? Awesome stuff! Well done, guys and girls! 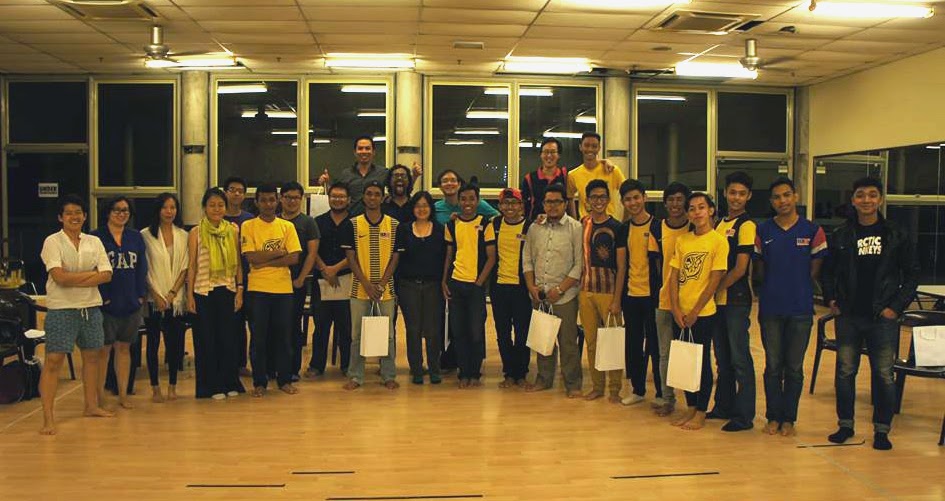 Ladies and gents, family and friends, please allow me this moment of sheer pride and accomplishment:

By George, I think I've done it! Faced with the challenge of composing the score of an entirely brand-new original musical in UNDER 2 MONTHS — a 2-hour-length, almost-entirely-sung-through, Phantom-esque piece — it's now Day 56 (yes, I've been keeping count) and I've completed the major musical numbers (all 18 of them), fully orchestrated backing tracks, PLUS lead sheets for Act I AND vocal demos!! Not to mention having edited the script and lyrics to begin with, AND further edited the revised lyrics to fit the new melodies!!

There are still some smaller sections of song to go, as well as sections of underscoring and Act II lead sheets... but I think I dare say IT'S DONE!!!!! And that's ON TOP OF rehearsing and performing 11 shows of Zak Zebra's African Safari last month, but NOT counting 10 days being sick/hospitalised for dengue fever. ALL I CAN SAY IS: WHEEEEEE!!!

Now please make sure you guys and girls COME TO THE SHOW!!! (Event details at The Dollmaker's Daughter; ticketing info to come!) Let me celebrate this achievement by sharing a snippet of music from the show, derived from some of the backing tracks with a small snippet of my demo vocals. Enjoy!!!

(PS: Have you checked out www.nickchoomusic.com lately?)
Posted by Nick Choo at 12:53 am No comments: