Here's Sarah, Laughton and I at dinner tonight at Grill'd, a scrumptious burger place in Subiaco where the servers were really cool and played along with us when we insisted that all three of us be called 'Sarah':
And for no reason at all whatsoever, here's a photo of me and Extra Ordinary People scriptwriter / director / producer Scotty McArdle: 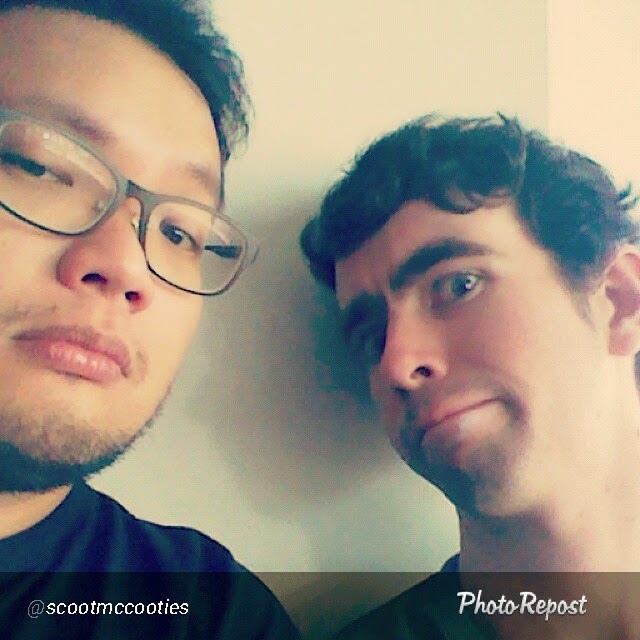 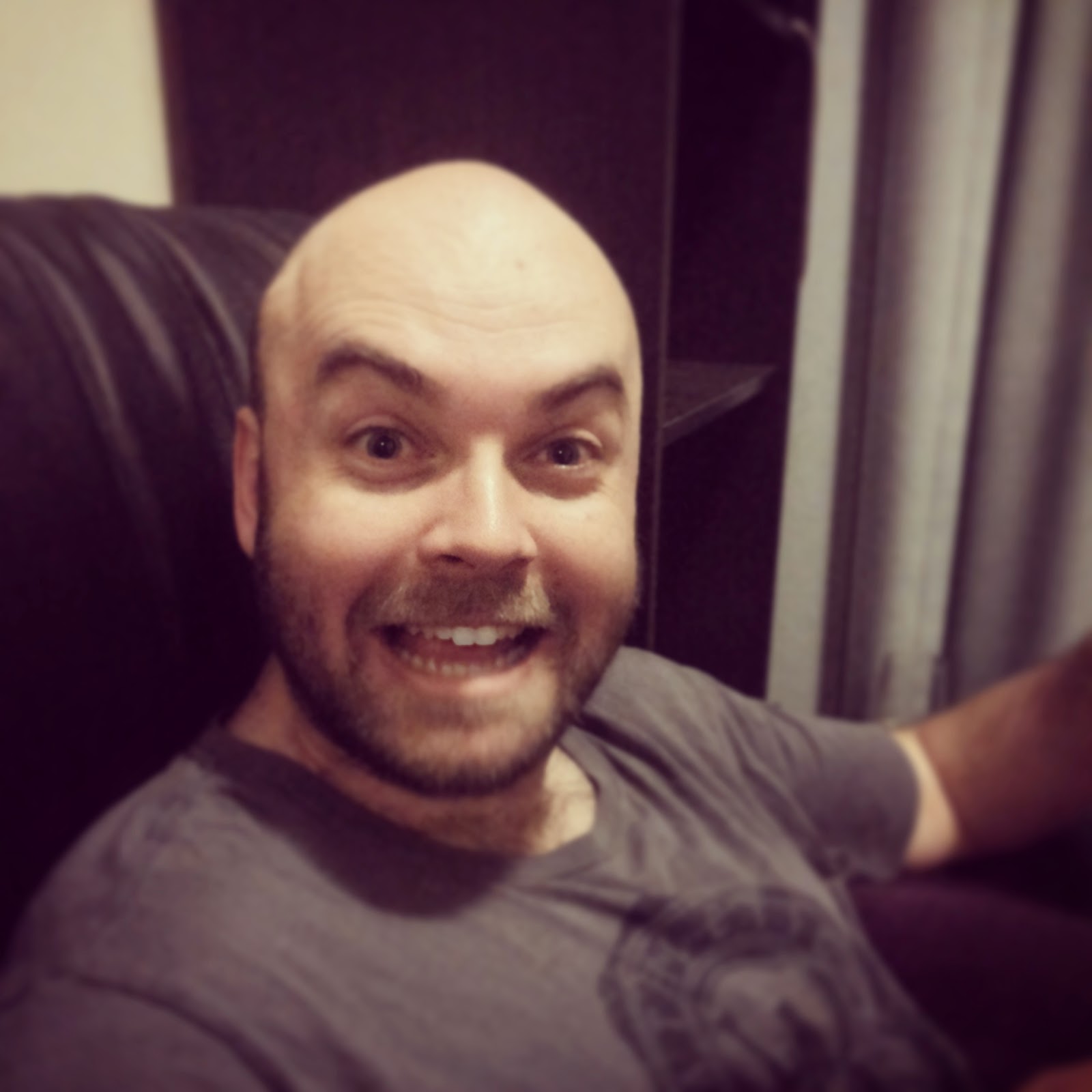 So lest you forget, Cymbeline is but one of two shows that I'll be working on here in Perth. Indeed, here's a video clip of the band from Extra Ordinary People having a go at one of the ballads from the show. Not too bad, in my opinion, for a first run. And it's always exciting for me to hear a project come together, especially when I'm not (yet) directly involved!

The Journey of King Cymbeline

Rehearsals for Shakespeare's Cymbeline are in full force at Nexus Theatre. But oy vey, is it a long (and long-winded!) show! "But it's Shakespeare!" you might exclaim... and you'd be right. Arf. Here are selected pics, which have also been posted to Instagram:

Hey all! Sorry for the lack of updates lately, but I'm too busy sitting around playing Candy Crush with my mates Laughton and Sarah at their spacially challenged apartment. I'll post up photos of their new place soon (too lazy to snap any pics right now) but here's us on the couch (which is also my bed): Actually, I'm pretty tired right now (long story, 12-hour rehearsal days for Shakespeare and all), so I'm going to keep this post short and simply put up a couple more pics of Sarah and Laughton. Because.... well, why not:

Yo everybody! I'm back in Perth at the moment, yippee!! Folks dropped me off at KL Sentral at 6:30am on Friday morning, after which I got on to the express train to KLIA2 before hopping on the plane!

Arrived here in the afternoon after a thankfully mostly smooth-sailing flight that was made sweeter by the fact that I'd had an aisle seat and two empty seats next to me! Alas, I'm not one who is able to sleep on planes despite the ability to lie down, arf arf, so I spent a large part of the flight over continually working on music scores.
Arrived at the airport, got through immigration relatively smoothly, had an obligatory cup of coffee and then I was off to Chris and Jade's! Friday evening I managed to catch my first rehearsal of the upcoming superhero musical Extra Ordinary People, and tomorrow (well, later today!) will be my first rehearsal of Shakespeare's Cymbeline. Really exciting stuff!

Tonight (Saturday), I managed to catch up with Beattie and we headed over to Mike and a very pregnant Bernie's, where we had a lovely roast dinner and chit-chatted about this and that. It was very wonderful to be able to catch up and chill out with old friends like that. Then it was alcohol and homemade soy pudding, before Beattie dropped me back at the Plottkes, where I'm now almost ready to turn in for the night, in preparation for a full day's rehearsal in the morning.

Till next time, boys and girls... check back in soon for more updates, okay? Cheerio!
Posted by Nick Choo at 1:01 am No comments:

Hey all! So I'll be leaving for Perth in less than a week, but until then, work continues on both Cymbeline and Extra Ordinary People ... scores, scores and more scores! But I ain't complaining. So not much else has been happening this past week, though the Cartography team did get together for a little cast party at Whimsical in Publika:

Speaking of Cartography, we were reviewed rather nicely in last Sunday's issue of The Star, in two separate reports on S+S. Check out the online versions here and here. I've also updated my (temporary) website, so go check that out!!! Oh yeah, recently I got a haircut, after a failed and frustrating attempt to let it grow long (it fast got annoying). Here's my model poser look: 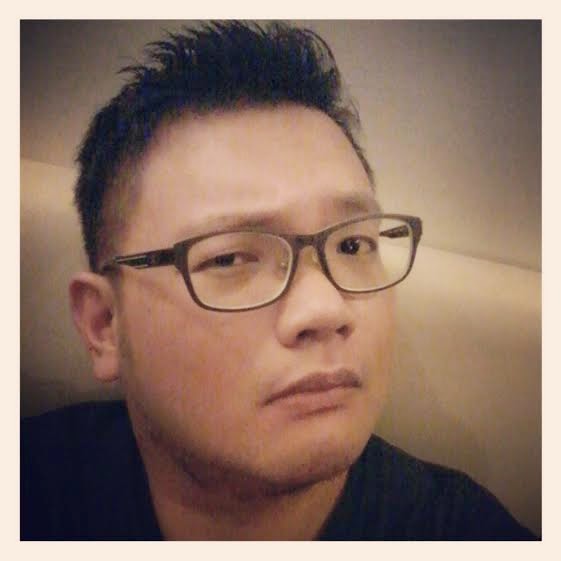 I also recentlly obtained a handy little gizmo that's got me pretty excited: an audio cassette tape to mp3 converter! At long last, I'll be able to save all the compositions that I'd recorded from the period circa 1995 to 1999 as digital files to be preserved indefinitely. I looked into the drawer where I'd kept all my tapes, and wouldn't you believe it, there are at least 20 cassettes filled with my (mostly mediocre, I'm sure) compositions! I don't want to think too hard about it because it's kinda deflating to realise that I haven't yet been professional recorded despite having been composing since I was literally 12 years old; but let's focus on the up-and-up, shalt we? 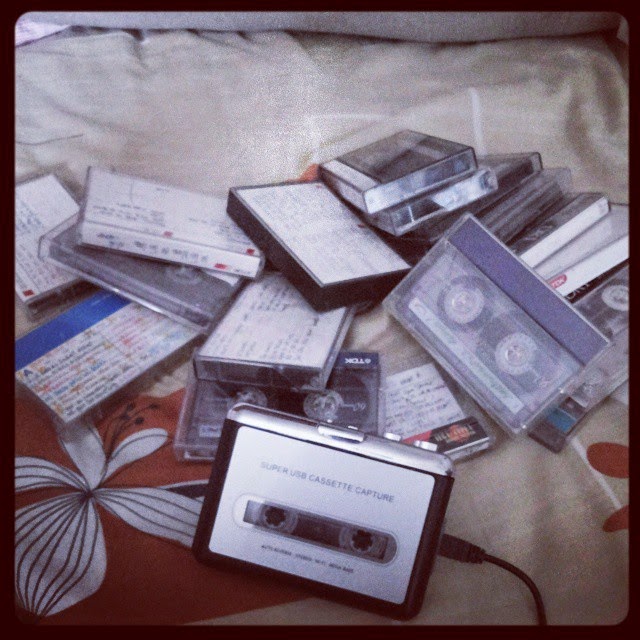 Coupled with the box of 3.5-inch floppy disks that I'd recently unearthed, filled with the recordings I'd done in Perth circa 2003 to 2007, this would mean I have a pretty big depository of archival compositions to draw on for future projects, as well as a nice historical trail for those songs that have already been performed! 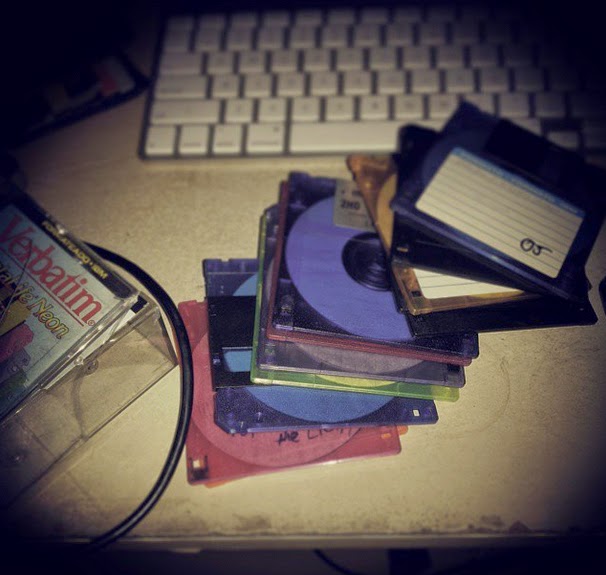 So what is the result of the cassette recordings, you ask? Well, here are some examples of melodies I'd composed as a teenager, ripped from the (obviously lesser-quality) cassette tapes! First off, a melody that was eventually used in one of my children's theatre shows, but which started off as this recording from 1996 from a project I'd entitled "Spooked". I have no idea what the story would've been about, but I'm guessing from the title of the piece (I Am Your Friend) that it was supposed to be about a ghost, eeeeek!!!!

There's this little gem: also from 1996, when we were all 16: my first-ever (attempt at a) original musical, something called Deux Moities, which is French for 'two halves'. This clips is sung by the character of the dastardly Queen, who undergoes a melodramatic grieving period after her husband (the King) cooks and eats her favourite pet chicken. Uh huh. The best part is, because I'd attended an all-boys school, all the female roles were played by men. And the bestest part is, the role of the Queen in 1996 was played by one Terry Ong, of childhood friend and current radio-presenter fame! HAHAHA!! Check out this scandalous recording:

Well, that's about all for now, boys and girls! Till next time!!
Posted by Nick Choo at 10:41 pm No comments:

Here's a vid of one of the live performances of Cartography of a Relationship. Enjoy!

Hey all! Apologies for the late update, but as is probably well known by now, we had a pretty awesome result for Short+Sweet Musical, with our lovely lead actress winning Best Female Lead Actor for Cartography, as well as yours truly claiming the Best Libretto (Script & Lyrics) and Best Composition prizes! To top it off, I was the recipient of the big prize, the Mercedes-Benz Malaysia Creative Excellence Award, which I'm really proud and grateful for!! (All pics below from various sources, including Short+Sweet Musical, Tang Chun Cheuh, Dennis Lee, Ida Mariana, Samantha de Lune, Dominic Luk and weelingc. Apologies for not individually crediting you guys, as I bulk-saved the lot and don't know who took what... but most of these are not mine!)
In presenting me with the award, KLPAC Artistic Director Joe Hasham said the following: "The Mercedes Benz Malaysia Creative Excellence award goes to a person who over the years has raised the bar for us with musical theatre. He has set the standard that has forced other people to improve their standards, and I believe a big part of the enrichment and progress of S+S Musical is due to this person, because he has done so much and has shown such creative excellence over the years." Yay!! So here's a big thank you to Joe and Faridah from KLPAC, to everyone who has continued to support me through the ups and downs, and of course to those involved in Cartography itself!!! You're all awesome!!!
This week has been busy with music scoring as well as auditions for the upcoming Malaysian premiere of Zak Zebra's African Safari. As of yesterday we managed to shortlist our candidates, and today we had the callback, during which they learnt some of the songs, did some dancing and some acting. At the end of it all, I think we've got a cast!! Yay! I'm very excited about this... but first, two more projects await: Shakespeare's Cymbeline, as well as the superhero musical Extra Ordinary People, both of which you'll likely be reading and hearing more about when I get to Perth towards the end of the month!

Well, that's about it for now, boys and girls... I leave you with pics aplenty from during and after Cartography. Enjoy!! 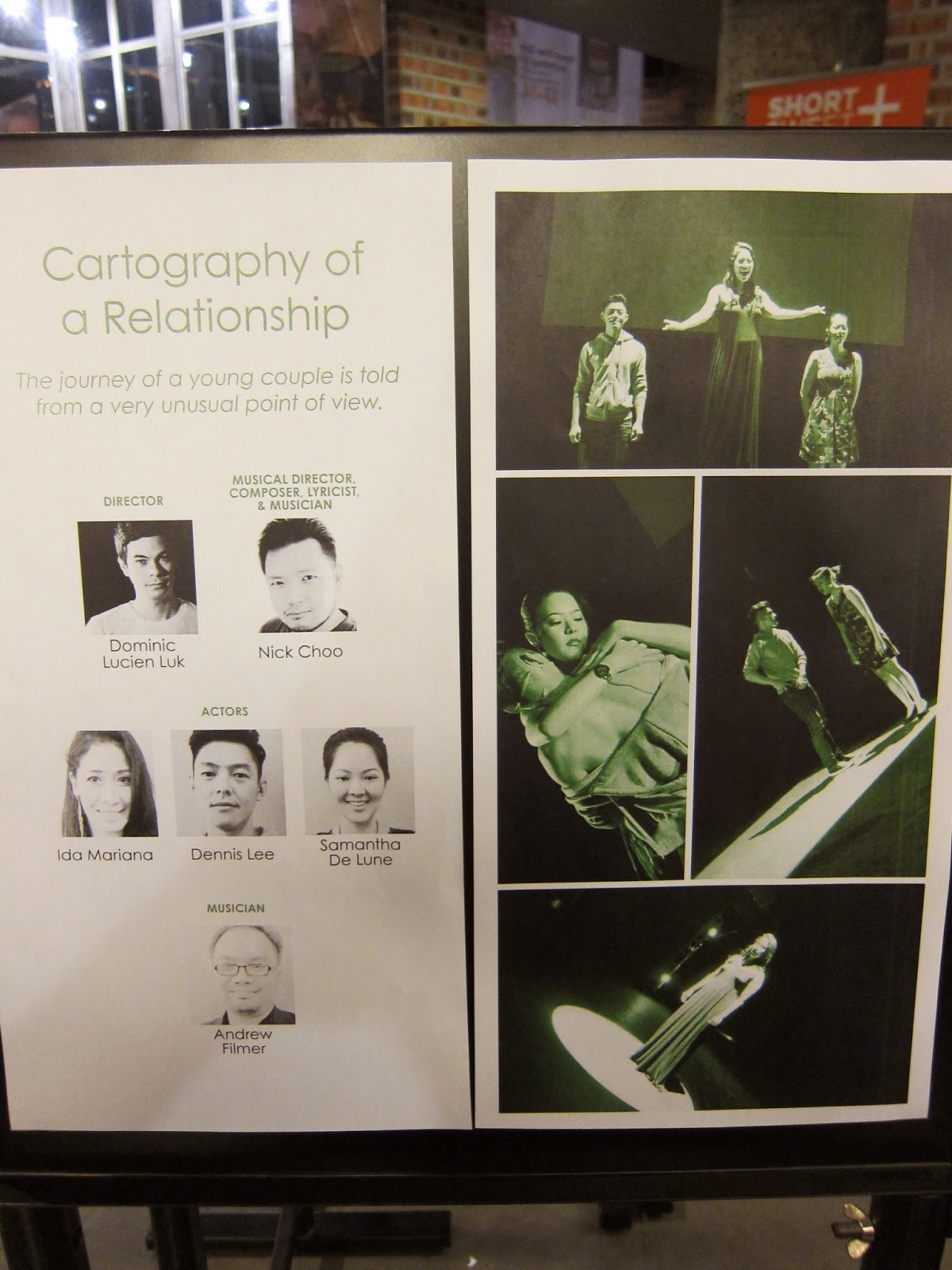 Cartography: We're In the Gala! 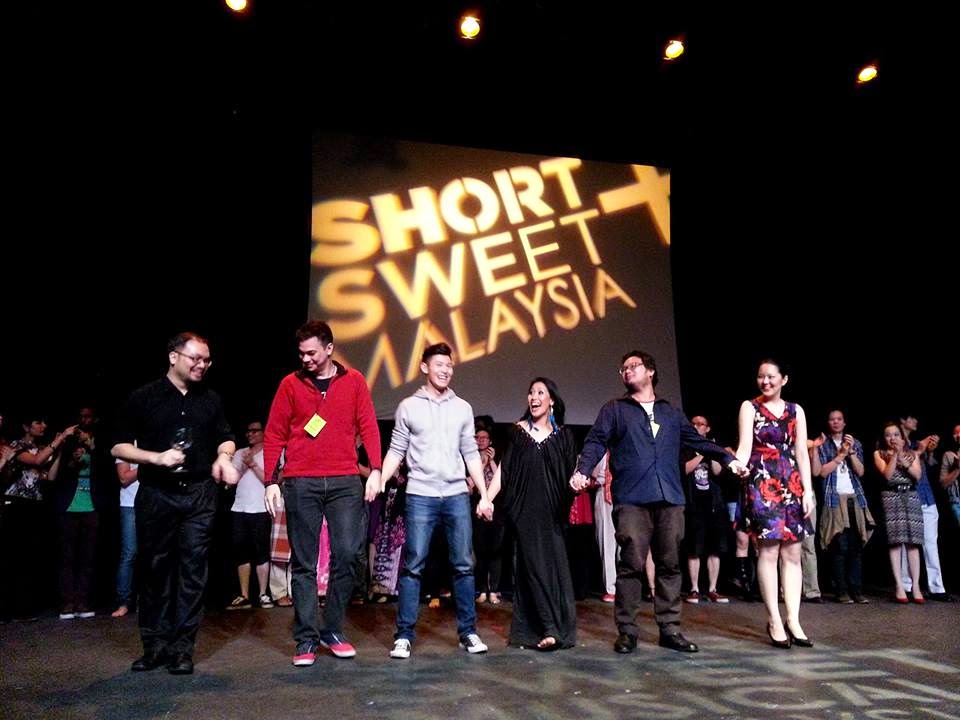 Tomorrow (tonight, rather) will be Gala Night, where we'll compete alongside 8(!) other finalists. Wish us luck, boys and girls! And stay tuned for more pics and updates!
Posted by Nick Choo at 2:37 am No comments: 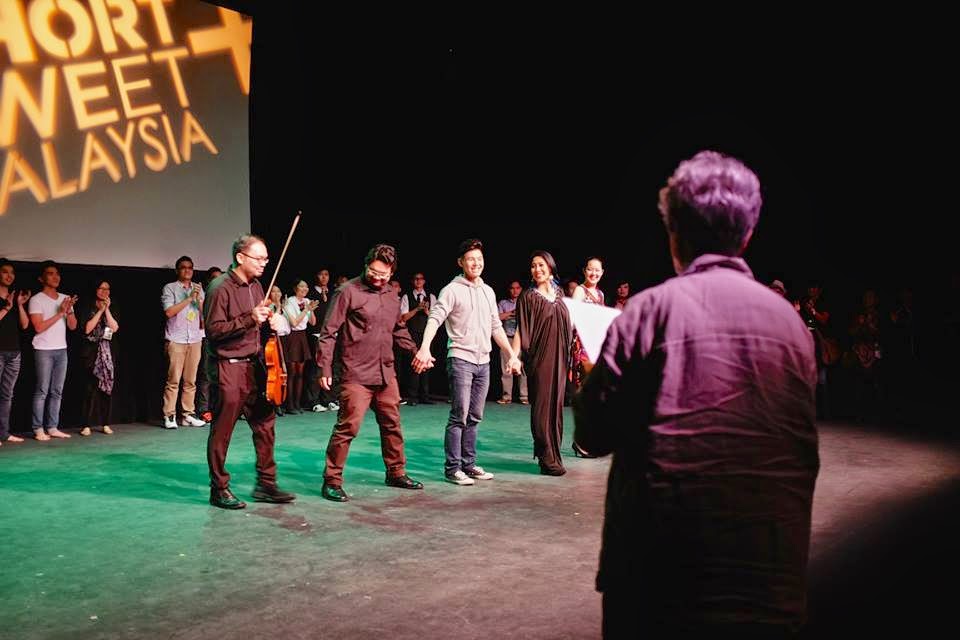 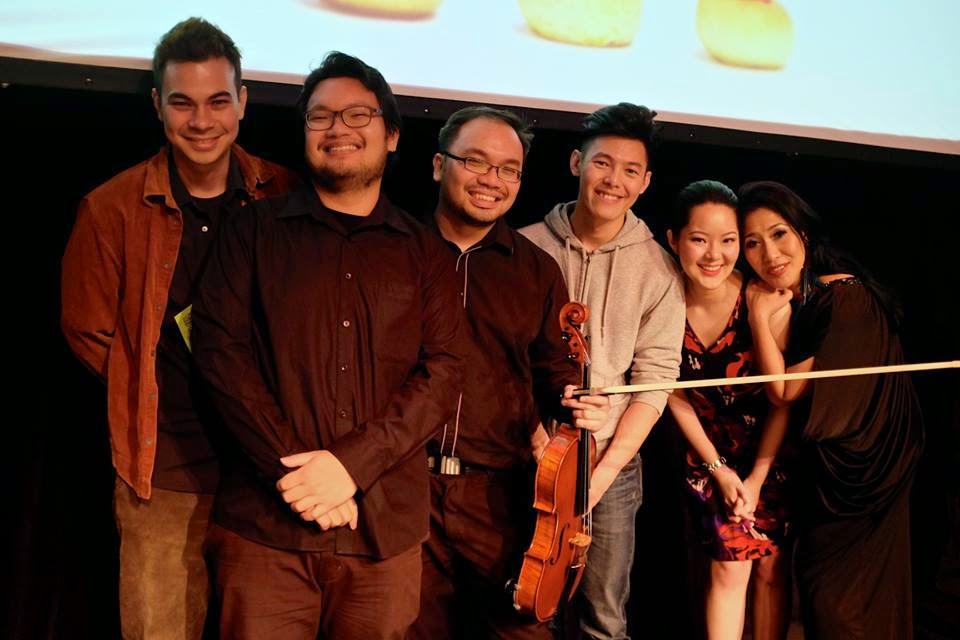 Cartography of a Relationship (or CAR for short)

And so last night we kicked off opening night of Week 2 of Short + Sweet Musical 2014, which includes the "world premiere" of my latest ten-minuter Cartography of a Relationship. I think it went really, really well, despite some very minor lyrical flubs (which, when you consider that our lovely star Ida Mariana is the only person who sings non-stop for 10 minutes and has, like, a million words to memorise and deliver, isn't such a big deal!). Here are some pics, in no particular order, taken by various folks in our team. If you're in KL, hope to see you there... we run until Saturday, and (fingers crossed) will be also performing on the final Gala Night on Sunday!!! 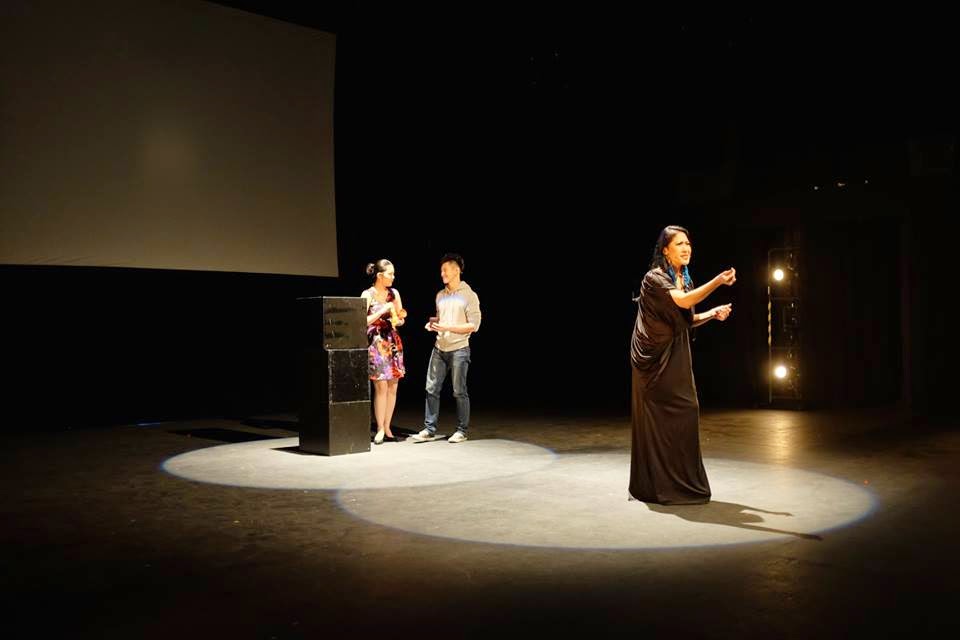 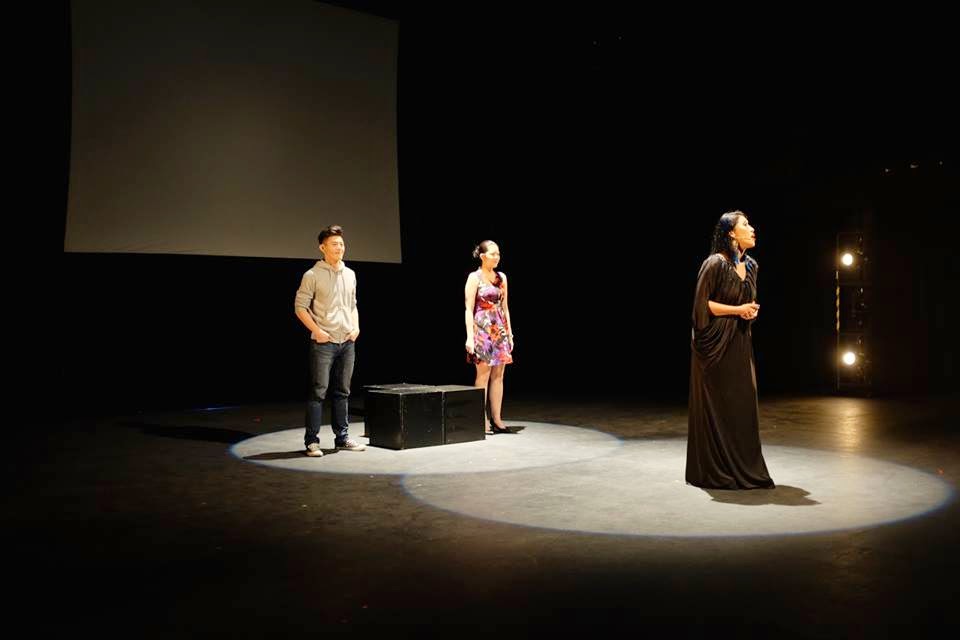 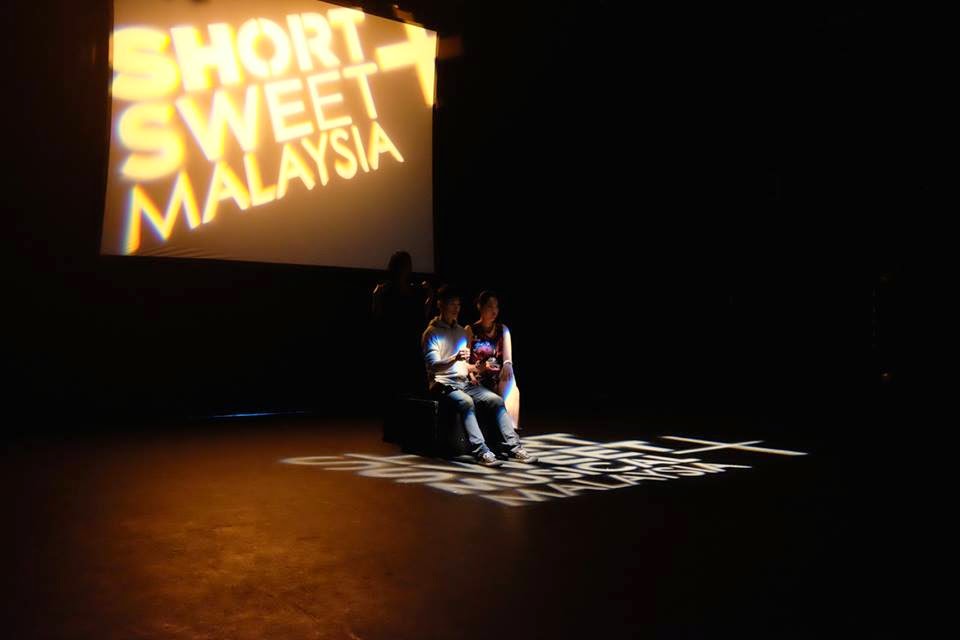 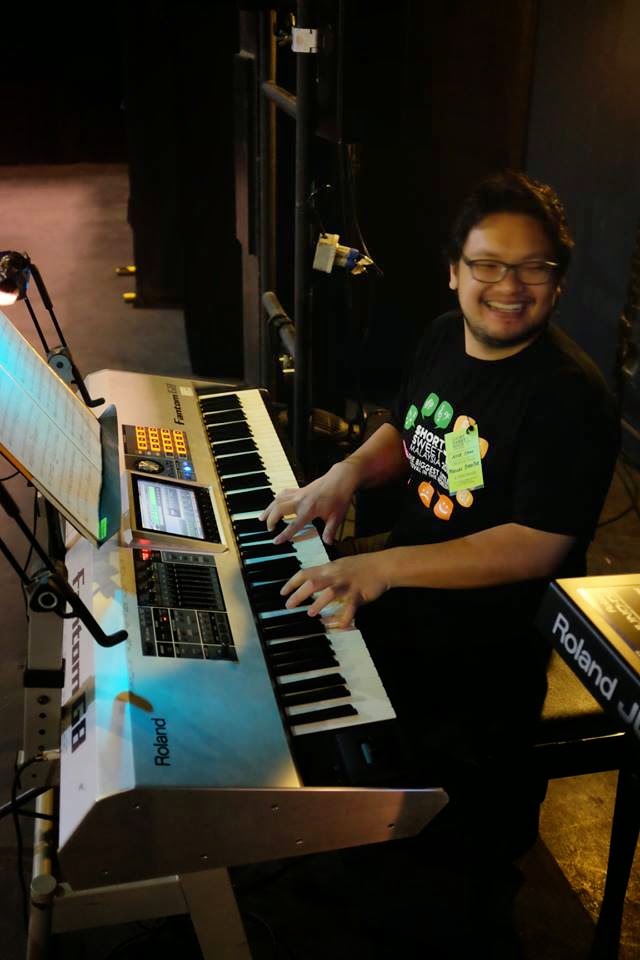 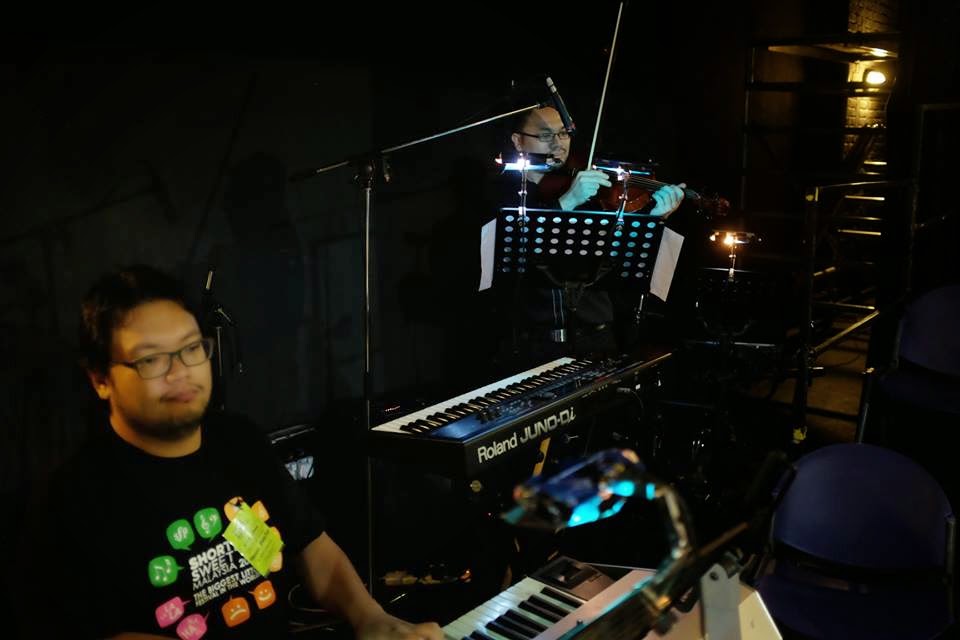 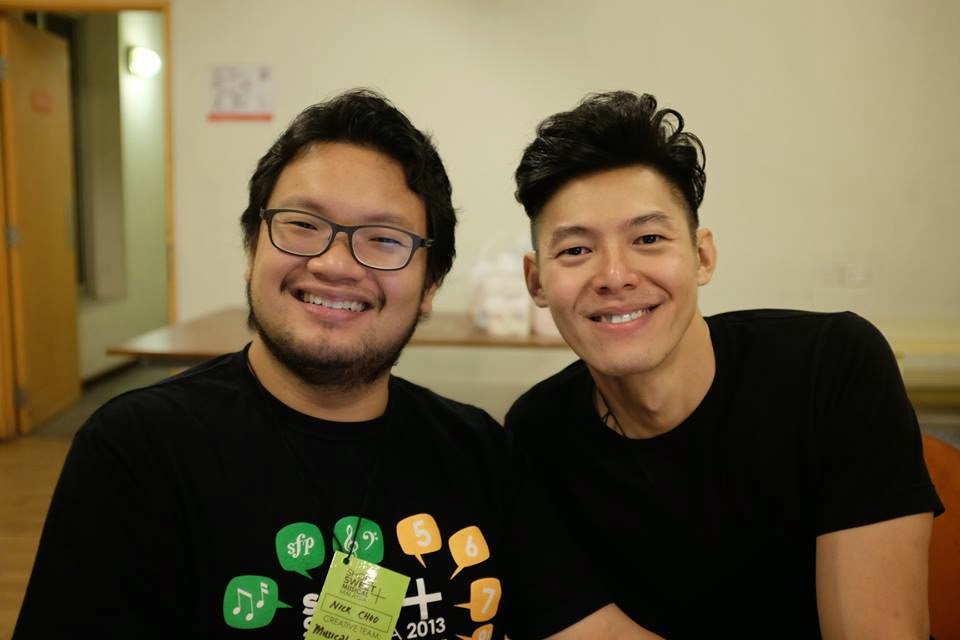 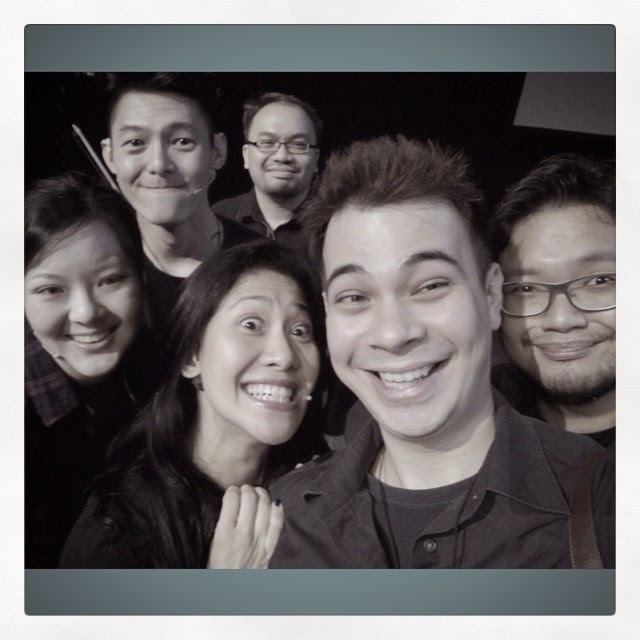 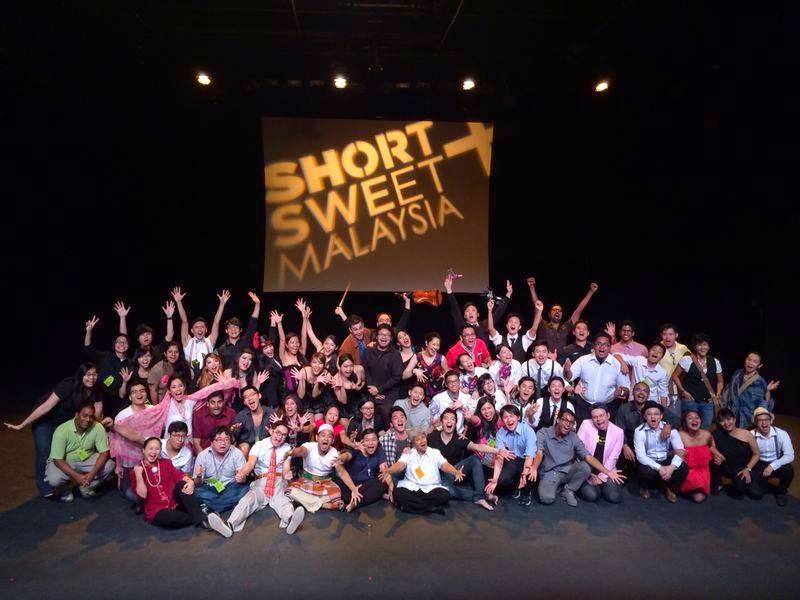