Yo boys and girls. I'm still alive, don't you worry. I know this blog has been neglected a little bit... I suppose that's the downside to having social media (FB, Twitter and the like)! Three weeks have zoomed by since my last update, and to be honest, I can't seem to recall any specific events that I should highlight (umm... apart from plane crashes and losing acquaintances, oy vey). I'm thinking that's one of the drawbacks of being a full-time freelancer: that all the days start to meld together!

Well, work has been ongoing in terms of composing for the year-end musical in Perth, Extra Ordinary People, and I'm going to be generous (and sneaky) by posting up a sneek preview of some of the songs, heheh. I'm quite proud of the work I'm doing with this one; it's still very much classic NickChoo (arf) and yet, due to its superhero theme, it's got an edge to it that's not apparent in my other works. Here, have a listen to some of the (instrumental only) music from the show! Check it out:

Oh yeah, on Saturday, my dear friends Michael and Anrie tied the knot, and I had the honour of attending and playing the piano for their little wedding ceremony at KLPAC. Yes, you read right: at the Kuala Lumpur Performing Arts Centre. Turns out they had met there eight years ago in a theatre production, so they thought it was only fitting to celebrate their nuptials in the venue where they'd first set eyes on each other. (By the by, Michael was in the 2008 production of The Edge, and Anrie was one of the Angels in 2010's Follow The Light [on the far left in the linked photo]). Congratulations, guys!!! And thank you for letting me play such a special part on your big day!

Speaking of The Edge, it's been six years since we did the workshop production: 24-27 July 2008! Wow! Happy anniversary, boys and girls!!

And speaking of six years, yesterday (Monday) marked the final publication of articles on The Nut Graph, which I've been working on and with since 2008. From a daily publication, we transitioned into putting up new articles weekly, and now our editor and co-founder Jacqueline has decided it's time to call it quits, to a flurry of impassioned messages on Twitter. So we've hung up our hats with this final article from Jac on why she came to this decision, and what the "little website that could" managed to achieve in its six years of existence. Goodbye, TNG! It's been a blast! (The site will still remain online as a resource, though, heheh!)

Well, I think that's about it for now. If anything else comes to mind that I feel I need to document here for posterity, I'll be sure to come back and update. Until next time!
Posted by Nick Choo at 2:39 am No comments:

Two Weeks Or So of Recaps, Folks!

Hey everyone! So, so sorry for the lack of updates... it's because I have been busy, thankfully, arf arf! Still alive and kicking, don't you worry. I'm going to try to recap some of what's been going on over the past few weeks... but I don't think I'm going to get them in chronological order (or will I??), so bear with me...

First up: on the weekend of June 28th I decided to finally start writing my 10-minute Short+Sweet Musical piece for this year, and I'm proud to say that I've managed to do it – for the most part! This year's piece is going to be a much more experimental one, for the primary reason that it's intended to be performed by just one person, oy! So I'm going to have fun figuring out who to cast and how to stage it, but we'll worry about that when the time comes. In the meantime, when I submitted my script on July 1, I declined to include my vocal demos this time around, so hopefully they'll still accept it (I've got the feeling they will). After all, they know my work, and I know how this all works, so it should all work out, no? Heh.

Also that weekend, Judi visited from Perth, on her way to Japan!! Wheeee!! I picked her up from KL Sentral and we took-away some McD's (as you do when you visit an Asian country from a Western one), before sending her to her hotel in some (cough cough cough dodgy cough cough) part of the city, arf. The following day I met up with her in the late evening (the majority of the day spent on my S+S piece), where we had dinner at the Penang food place in KLCC, followed by dessert at Baskin Robbins before Judi headed back to her hotel via a concierge driver service courtesy of Uber. Yaaay!! A short but lovely time catching up!

Sunday night was also the night that I hung out with the crew from my former workplace, The Nut Graph, where we had a lovely dinner and catch-up at Jo-Ann's big house, which I house-sat last year. In incidental news, I'm playing the role of co-house-sitter again this time around, yippee! Movies on the big screen, here we come!!!!

What else? Hmmm, been kicking up the composing for this year's November project in Perth, an extraordinary little musical called Extra Ordinary People, which has a superhero theme! (More details on this to come!) Have also been working on a three-part arrangement of a local Malay song for my dear friend Dom, for his music students to learn.

Then there was the rehearsal with a local community choir, which will be having a concert this August that features a medley I arranged of songs from Athena Emu at the Olympics, last staged in 2004(!). Just last Monday I headed to their rehearsal venue where I got to hear them sing it for the first time, which was pretty cool. Looking forward to the concert! In the meantime, here's a very brief sneak peek:


(On a totally irrelevant note, how do you like the way I've laid out the photos in this blog post? Why haven't I done more of the 'right-' or 'left-align' layouts before? Oy!)

And then today (well, yesterday, really) I managed to catch up with my dear friend Janet Lee, who's been planning a debut album release at the end of this year for which I've written several songs! As of right now the plan (fingers crossed) is that two of these songs will make it... let's see what happens over the next few months, eh?

Here's Janet and me from our tea-time musical date this afternoon, which involved practising at her keyboard before heading downstairs to a lovely little bakery called Tommy Le Baker, where I had the most awesomest spinach and chicken quiche (damn, forgot to take pics!) as well as an equally terrific steak sandwich for dinner. The best part is that, as the bakery closes for the day, the unsold bread is given away for free (there's a sign that reads "Pay if you want, take if you need"), so I got away with a low-priced baguette and a free sourdough loaf! Woot woot!! Will definitely return! 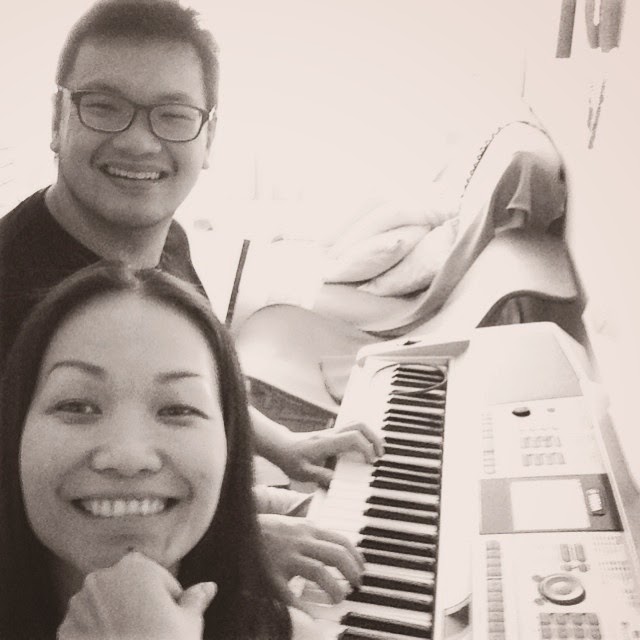 Finally, speaking of food, here's a pic of little Ashley, mah doggie, who's munching away at her dinner: low-calorie dry doggy food; a five-vegetable medley (green bean, carrot, potato, pumpkin and celery), and lean minced chicken simmered in the vegetable stock (for the nutrients). Oy vey, this dog eats better than a lot of us do, no joke!!! Arf arf!! 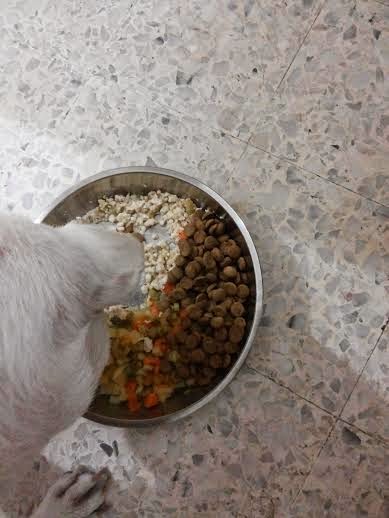 Well, I think that's about it for now... and you're all caught up!

So what's new with you?
Posted by Nick Choo at 2:09 am No comments: