The Chicken and the Egg - On Stage

I wrote this as a Facebook status but decided against publishing it. Just for the record, here it is:

Contemplation on the artist's common problem: If I had the money I'd be producing top-notch productions to really showcase what I can do. But I don't have the money. So I'm either resigned to showcase what passes for mediocrity due to a lack of affordable albeit high-quality talent -- or I keep passing on producing anything until the day comes when I can actually produce shows of the quality I am aiming for, the quality I KNOW my works can achieve, and the quality my work DESERVES.

This isn't to belittle the work I've already done; it's a reflection, I think, on why I've not produced more work than I have. Or is it an excuse? Either way. Thank God for good producers who make things possible, though these are hard to come by or aren't always accessible. And based on past experience, being a vital member of the creative team (i.e. scriptwriter, lyricist, composer, arranger) AND being a producer at the same time is a backbreaking task. So.... what now?

So I guess, in my humble opinion, I have to accept an artist with talent will likely go largely undiscovered, unless he or she decides it's okay to JUST stage something even if the final result ends up being "Oh, it could have been better...." Or "oh, there was so much potential, BUT". Or can we argue that if a work is good, it will shine through anyway, even if the execution is far from perfect?

I think I think too much. On a cynical note, the Malaysian audience DOES tend to lap up mediocrity, so maybe I've got nothing to be unhappy about.
Posted by Nick Choo at 11:16 am No comments:

Almost a week late, but here are some pics from dinner (Nandos, baby!) and movie night (Identity Theft; The Call; Crazy. Stupid. Love) last Saturday with Terry, Debs and Chrisse at the Big House: 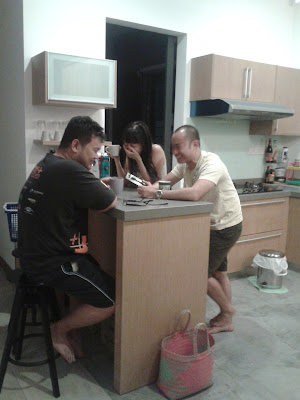 Here's a random pic of my dear doggy Ashley, contemplating a nap: 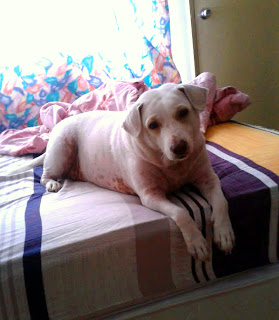 Um. Nothing much else to add, since my days, as previously mentioned, are filled mostly with part-time work and music scoring. But I'm happy to report that I've submitted an entry for Short+Sweet Musical this year and it has been accepted, so on top of all the Edge madness I've got to factor in my ten-minute piece Dreaming Outside the Box, too. Funny story, a friend of mine, Terence, had also submitted an entry, and his is called Out of the Box. So that's going to be fun and not confusing at all for the audience, heh.

And since I've mentioned Terence, here's something I posted on Facebook earlier today after a round of homemade jelly-making (my first attempt! We shall see how good they taste as soon as they're chilled!). You can read his comment in reply. Incidentally I was merely quoting lines uttered by Linus from the latest Peanuts compilation I ordered and received a coupla days ago, but there you have it. 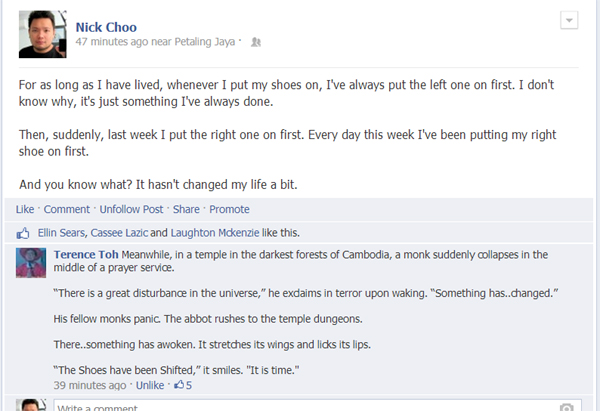 So I was walking my doggy Ashley when I encountered these three cuties taking shelter in the back compound of a distant neighbour's yard. 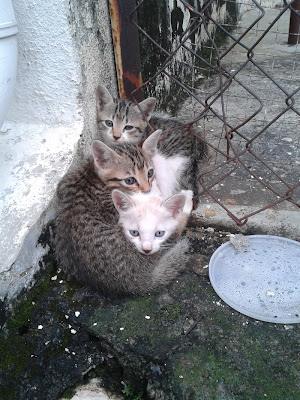 My first instinct was to get some advice from mates to look into getting these kitties sheltered or adopted, but I found out that they are still being looked after by their mommy cat, so I didn't like the idea of taking babies away from their momma. Anyway I've been feeding them for the past week (kitty food is, thankfully, cheap!), and I guess the plan right now is to keep looking after them until they're old enough to fend for themselves. Incidentally, I haven't yet spoken to the neighbour whose house the kits are sheltering at; but, based on the condition of the backyard, it looks like the neighbours don't wander out to the rear too often...

Meanwhile, the rest of the week has been spent working on music scores for The Edge, as well as housesitting. The latter has been mostly fun, though the security alarm went off a couple of times recently, methinks due to stormy weather; the first time was in the middle of the night when I'd decided to stay at my own home instead of at the Big House. Imagine my startlement when I picked up my phone to messages from the homeowner's dad saying the alarm had gone off, oy vey.

The second startlement was last night when, after a dinner and movie night with Debra and Chrisse (on the playlist: A Harold & Kumar 3D Christmas minus the 3D, plus a chick flick Easy A, which was actually pretty funny), the system kept insisting a particular zone in the house was unsecure, even though I'd checked every door thoroughly. At 2am, it's kinda unnerving when the security system tells you something's amiss, y'know wot I mean? Fortunately, in both cases it was just a false alarm... probably crossed wiring somewhere. The security folks will be checking it out at some point this week.

That's all for now, folks!

Quiet weekend. Hung out with Terry at The House (now with upper case) on Friday night, where we watched a double feature: a horror/sci-fi flick titled Dark Skies (pretty fun), and the fantasy film Hansel & Gretel (also fun, but I liked the other one more). Last night I chilled at home with Wreck-It Ralph, which I only so-so liked (precocious kids annoy the heckoutta me). Here's Terry as we prepared for the viewing, his mind wondering how he'd ever go back to watching movies at home on regular TV screens again... 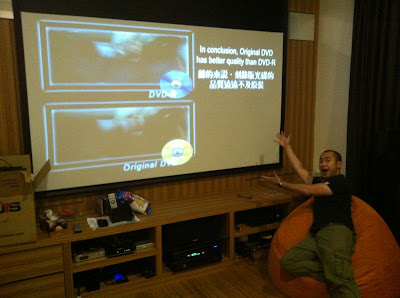 Of Humble Feasts and Humble Abodes

Hey all! I'm still alive, don't worry! Just thought I'd finally drop in with some updates. Let's see. One week ago from last Saturday, I met up with the fabulous peeps who are producing my musical The Edge, and we had our first "full company" meeting, i.e. with the entire cast present, to go through the script and sort out the nitty-gritty. So that was pretty fun, albeit a tad awkward since the script read involved playing my demos at full blast, meaning everyone had to listen to me croon and croak away on those recordings, arf arf. Here's a pic of all of us during the meeting:

I think it was the Thursday prior to that Saturday that little Jo was in town, so Terry and I met up with her for lunch at Mid Valley, where we decided to order a Father's Day Special feast. And what a feast it was: a huge platter with, like, six type of meats, potato salad and sauerkraut ... plus, Terry and I had soups! Arf! Suffice it to say we were pretty porked out by the end of it... though it was pretty boargasmic!

The past few days have been a blur of working in the morning, doing nothing much on occasion, starting work on music scores for The Edge, and - on a whim - conceptualising and writing an entry for this year's Short and Sweet Musical festival, which (if you remember) I'd entered before on two previous occasions. I won't give too much away about this just yet, but stay tuned for more info, k? Today's the deadline to submit the entry and I still have to finish recording the demos, so I should get on that, heh. Meanwhile, I find that I'm the most creative when I'm forced to be creative in a short period. Case in point? I composed the music and wrote the lyrics and script in pretty much about a day, having had only three days remaining till the deadline by the time I stopped procrasturbating (yes, that's a word) and sat down to actually write. I think it's some of my best work yet, arf arf!!!

Well, I guess I should get home now and do some recording work. Oh, did I not mention? I'm currently at my friend J's house, looking after her home while she's away overseas for seven weeks. So I'm tasked with the usual upkeeping duties while being given pretty much free reign to come and go, stay or leave (overnights included). And let me tell you, it's a pretty awesome house - it's huge, and it's modern, and yet comfortable! I've already brought Terry and Debs over and we intend to, y'know, chill here and stuff (hey, my friend says it's okay!) ... but yeah, this should be fun! I don't want to post too many pics of her home because it would be invading her privacy, but... y'know wot, I can't help it, this place is too cool to not put a photo or four up!  Check it out! 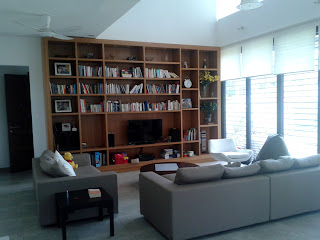