Hey all, sorry for the lack of updates. The past fortnight since coming back from Perth has been a haze of doing nothing (arf arf, always a luxury), mixed in with finishing off the long overdue recordings of demos for the upcoming production of The Edge (22 complicated tracks adding up to more than 110 minutes of music. Oy! If a regular-length album averages 55 minutes, that's the equivalent of two albums right there); as well as editing a novel for one of my dear friends, Demelza Carlton. Not to mention still working on the morning shift for the Singypoo paper from 5am to 9am weekdays. So it's been a pretty laidback/busy couple of weeks. What's a combination of laidback and busy? Baidback. Laisy. Either way, it's an oxymoron, but that's how it felt; when I was busy, I was very, very busy; when I was chillin', I was totes chillin', y'know? Arf.

Anyhoo I'll be back soon with more updates. Stay tuned!! In the meantime, if you're stuck for something to do, why not check out and 'like' my Facebook music page?? ;)
Posted by Nick Choo at 7:49 am No comments:

...that my doggy Ashley is just the slightest bit spoiled. 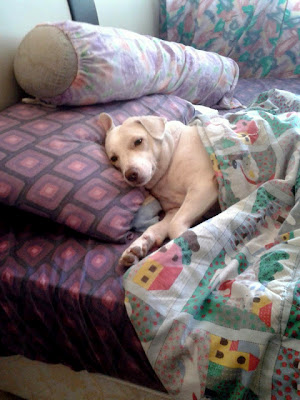 All pics by Hayley Vermeulen. Thanks, Hayley - great job! 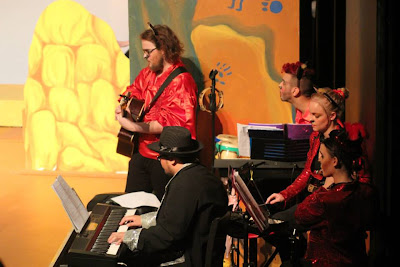 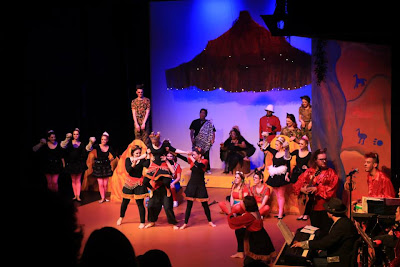 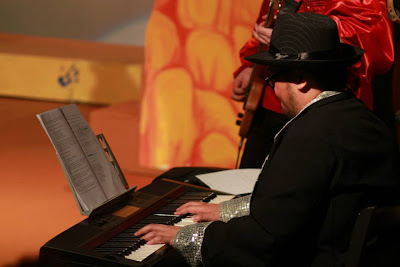 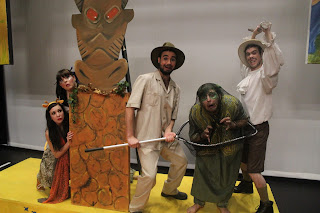 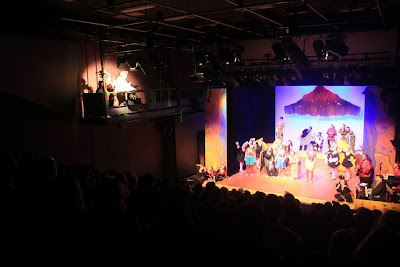 Hey all, I'm back. So where was I? Oh yeah, Thursday. Thursday was a fun day. After the morning show at Nexus, we packed up and travelled en masse 45 minutes or thereabouts to Mandurah to perform at the Mandurah Catholic College. It went exceedingly well, considering we had little to no idea that the performance space would be like and what facilities were available to us. So it was literally a matter of going there, scoping out the space, making a few tweaks to the blocking and such, setting up, perform, pack up and go.

It truly was a job well done by all involved that day, despite the constraints of a smaller stage and a much, much larger (gym) auditorium! Not to mention we didn't have the full cast, which resulted in our trusty stand-in Joel taking on the role of Oscar the Ostrich, while we, the band, didn't have our lead singer Quentin to do one of the songs, leading to a rather mad scramble when, as we approached that musical number, we realised we didn't know who was going to perform it! (Solution? All of us!) Here are some pics:

On Friday, after the show, I met up with Carol and Scott for pizza in Applecross, followed by dessert at this Asian place in Northbridge called Meet Fresh, which everyone had been raving about. I dunno if it's because I'm the jaded Asian (the Asian jade?), but I didn't think it was anything spectacular, oy. I mean, it was all right, a dime a dozen in Kay Ell, which may have been the problem, arf arf, and really the main impression it left on me was that the name of the store sounds a lot like Subway's tagline. So... yeah. The company was good though, LOL!!! It's always fun to meet up with Beattie and Carol and Scott and the others in the group, which happened way too little this time around. And poor Bernie was laid up sick at home, too. Sadface.

On Saturday, I had a good ol' sleep-in before scarfing down leftover pizza and hightailing it to Nexus, where we had our final two performances which were open to the public. They both went awesomely well, as I've mentioned earlier; the second show, in particular, was through the roof thanks to the overexuberant response of the audience who were clearly mates of those in the cast. There's a fine line between enthusiastic and distracting, but never mind, it was a great show all in all, heh. And then afterwards we had the usual parting words with the cast and crew, bump-out of the theatre, and the cast party, which I decided not to attend since I had a flight to catch a mere few hours later!! Probably a wise choice, based on the scandalous photos that subsequently emerged on Facebook, arf arf. But anyhoo. Pics from Saturday night:

Cut to: 4:30am, when Beattie, bless her, pulls up in the Plottke driveway to bring me to the airport. Bleary-eyed, exhausted, happy and wistful all at once, I bade her adieu and proceeded to get on that plane home, but not before randomly bumping into an old friend, Xavier (who was in Follow the Light), also waiting for the same flight home, arf.

So that's the Perth adventure, boys and girls!! It was a wonderful trip, a great experience with the children's theatre team, reviving a lot of rejuvenation and motivation within me for the arts (which is awesome), and also triggering off the realisation that I'm ready to be back in Aussieland on a semi-long-term basis. So Jenny and I have begun discussing my application for a PhD scholarship, which, if all goes well, I shall apply for later this year. If I get it, by 2014: Perth, here I come!! In the meantime, though, there are projects to need my continual focus for this year, and plans for next year theatrically as well... not to mention I've only just embarked on the first day of the revamped morning shift with the newspaper (finished a couple of hours ago: I work from home, get paid, and have the rest of the day to myself, win win win)... so it's all looking uphill, God willing. I still get the occasional melancholy moment every now and then, and I think that's normal, but for the most part I'm happier than I've been in a rather long time, woot woot!!

Thanks to Lizzy W for the pic! 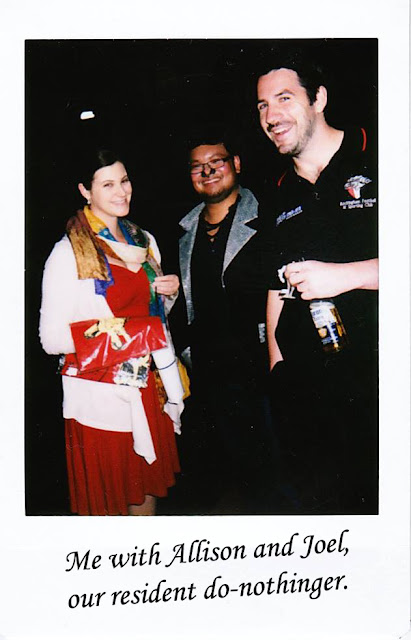 Hello boys and girls, how's everyone doing? Well, as of right now, I'm back in my little ol' bedroom in PJ, having gotten on a plane this morning after two pretty awesome weeks in Perth. The shows, which we performed every day of the week since Monday to schoolkids in the day and to the public on Saturday, were (in my opinion) among the best we've ever done for Children's Theatre under Jenny. Meanwhile, the two weeks have just flown by - not nearly long enough, in my opinion!!

But never mind. Here are some recaps of what I'd gotten up to over the past few days. Let's see... after the first school show on Monday morning, I... don't recall what happened next, LOL. I think it might have been one of those relatively quiet evenings where I just hung out at the Plottkes and played card games. Which, you know, when on holiday, can be pretty awesome. Oh wait, on Monday evening Jenny and I met up with Arnold and we had a meeting down at the Dome in Applecross, with theatrical plans for the short- and long-term. Nothing's definite on that front just yet, but we should be hearing back from Arnold real soon with some updates, so I'll keep you guys in the loop as and when things develop.

The same blissful doing-nothing-much applied to Tuesday - a quiet evening at home - and I think it was on Wednesday, after the morning show, that we were allowed to go out and meet-and-greet a bunch of kiddies who'd been brought to the theatre by one of our former CT alums Allison. The children proceeded to swarm the actors demanding for autographs and squealing that so-and-so was their favourite character. Ah, fifteen minutes of fame!!

On Wednesday, I headed into the city to meet with an old mate Paul M (heeey, Paaull!), whom I hadn't seen in about seven years, and it was a really great catch-up complete with lunch and coffees in pretty frigid temperatures. Regrettably I'd forgotten to take any photos of our meeting, so... y'know... that's that, then. But it was great seeing him again, and after our meet-up I trained it north of the city, where I was picked up by my dear old mate Alex (hiiii, Alexxx!). We proceeded to his place, where I had a lovely catch-up with Mel and the kiddies Riley and Theo, and we hung out for a bit before heading over to an Indian restaurant for a spicy dinner, followed by way too much dessert (if there's such a thing) at a neighbouring coffee shop. Here are some pics of me and the family!!

So that covers my adventures (cough) up until Wednesday... I'm going to sign off now and resume tomorrow with more recaps, so be sure to check back in. In the meantime, I'm resuming the morning shift with the newspaper in Singapore in a few hours (working remotely from home, of course), so I gotta get to bed. But let's see... the next few posts should cover the school visit that we did; pizza and dessert with the gang; and oh, the awesome final two shows at Nexus! See you real soon!!!
Posted by Nick Choo at 10:48 pm No comments: