Hey, boys and girls! Wow, time sure flies, doesn't it. Just some quick updates: last week, I bought a new toy for myself, and on Friday it was delivered. I'll keep you in suspense a little bit longer was to what it is, but it's a big item that (theoretically) would help me keep in shape. Oh what the heck, it's an elliptical rider, one of those fitness machines with the arm-thingies you move back and forth while you step on the pedals and... y'know... work out. Hmmm. Not having a good writing day. Arf. Anyway, I'll post a pic of it later. I was actually going to borrow the one from my folks' house, but apparently dad uses it, and so he said, "You want one of these? Go buy your own." So I did. Fun. Whoohoo.

Edited to add: Here are pics! 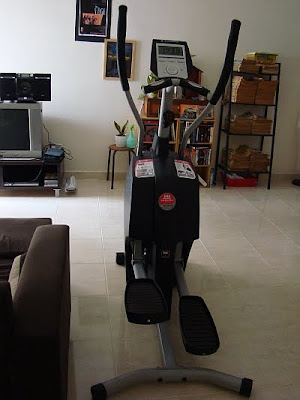 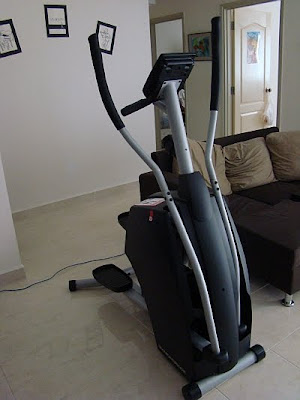 Today I had a meeting with Colin, director of next year's FTL and Nora, our producer. Can't go into details, but let's just say some exciting developments are taking place, with an intriguing proposal by Nora that would definitely increase the odds of our putting on successful show!! When the deal is sealed and things are official, I'll share more info. But for now, I'm wondering if it might be too ambitious to proceed with my plan to produce The Edge by mid-year. Right now I'm feeling rather tired, so I'm not in the best frame of mind to decide on this... but basically, it's that age-old conundrum: would I be doing too much and stretching myself too thin by trying to do two musicals next year??

Till next time!
Posted by Nick Choo at 8:08 pm No comments: Links to this post

Still alive, folks. Nothing much been happening; just been spending time at work, in the apartment, and with my folks. Been eating waaay too much lately. Gawsh, it's amazing how quickly and easy it is to gain weight, versus the amount of suffering required to lose it. Dammit. I'm going to need to go back on the diet menu for a few days. Too much binge eating over last week's depression phase, which thankfully is over (for the most part). Heh.

Anyway, I'll write more as and when things happen. But till then, expect minimal updates, LOL. Just check back in on the Twitterbar at the very least. Later!
Posted by Nick Choo at 4:21 pm No comments: Links to this post

Now that that's out of my system, let me once again praise the awesomeness that is Supernatural. The latest episode to air in the US, called Changing Channels, has our heroes Sam and Dean caught in a series of terrifyingly hilarious parallel universes that mirror popular television shows, thanks to a powerful creature known as the Trickster who is able to alter reality. So Sam and Dean get caught in a crazy series of scenes a la Grey's Anatomy, CSI, Knight Rider, and even a Japanese game show. But my favourite has to be the way the episode started: with Sam and Dean being characters in a cheesy sitcom. Cue this hilarious video clip of the teaser and intro to the episode. Enjoy!!

Posted by Nick Choo at 7:23 pm No comments: Links to this post

Hi guys and girls. Just a brief update on what's being going on, which is the usual: not much. Once again I've been pretty down lately, feeling bummed and frustrated and kinda feeling the need to run away and get out of this depressing rut. But anyway. As of 2 Nov, I officially finished the first draft of rewrites on my musical The Edge, which I hope will be staged by April or latest May 2010. So that's really quite exciting, and yet frustrating, knowing there's this material that I know, I know deserves to be staged and yet hasn't, while mediocre productions are cropping up left right and centre out there. Sorry if that makes me sound like a self-absorbed douche. I prefer to see it as being confident of what I'm able to do, even though I don't feel that confidence as much as I tell myself I should. Does that make sense? Oh whatever.

Anyway, next steps involve putting together a production team, finding cast and crew, and then having to work on the demos and scores and the... gah, you know how it is. I'm exhausted just thinking about it. And then I get frustrated. And then I get bummed and feel the need to run away. See a pattern here? Meanwhile, I'm thrilled I went on this diet, because now that I've rediscovered the joys of binge-eating, it sure makes me feel damn good to stuff my face to make myself feel better. Lovely, isn't it? Like I said to little Jo the other day, sometimes I just don't have the motivation and energy to live. Life is too exhausting. Which isn't indicative of my wanting it to end, so don't you worry about that, but I'm just saying... I'm tired of being tired, and yet I'm still here. I'm still here and going nowhere fast.

End scene.
Posted by Nick Choo at 7:15 pm No comments: Links to this post